The 2009 All Arizona Messier Marathon has been over for a few days. And only now have I been able to recover my senses enough to write about it. My first Messier Marathon in 2006 was plagued by a clouds, and was only able to log an even 100 objects. I went into this year’s marathon with the ambitious goal of not just observing all 110, but sketching each of them. 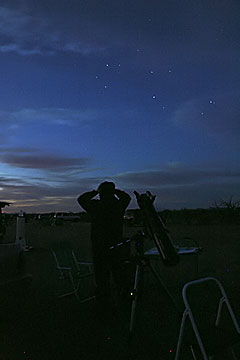 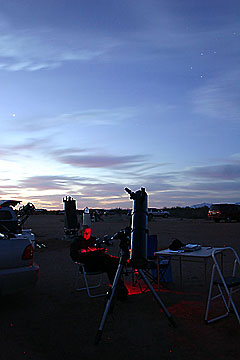 Excuses: I did not count on how difficult it would be to star hop to M74 in the murky twilight along the horizon. Nor did I realize how badly the Phoenix light dome would assault M31’s companions. Then a 2 am onslaught of clouds tore into the Summer Milky Way and I ended up losing M72, M73 and M30.

I arrived at the Farnsworth Ranch site at about 5:30 pm and set up my SkyView Pro 6LT (6″ f/8 Equatorial Newtonian) next to the Polakises and wandered around for a bit to see what I could see. The CloudyNights encampment included Tom Watson, Ron Boe, Scott K and Greg K. Ron had a gorgeous set of eyepieces he planned on evaluating during the night. Scott had his 15 x 80 binoculars set up for marathoning while Greg was set up next door. Tom Watson brought his trusty three-legged Newt and a sturdy old refractor he was employing in another observing project. The 6:30 pm pep talk was MC’d by Rick Tejera and Jack Jones. The rough count of attendees was 90 vehicles and about 140 people. As the twilight faded, the sky looked great, and I had high hopes for a great run. 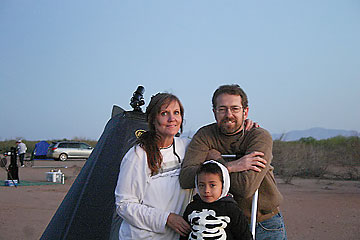 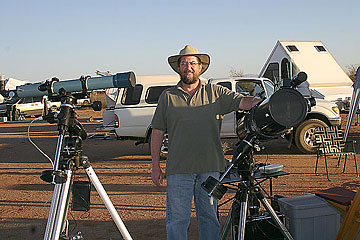 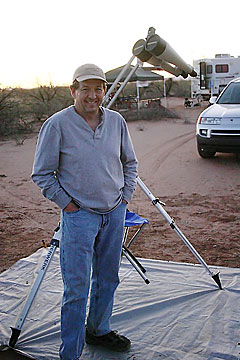 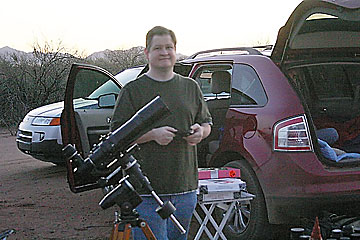 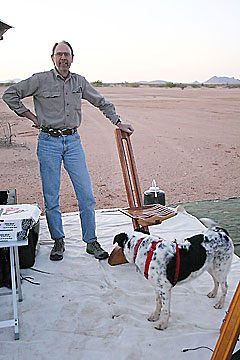 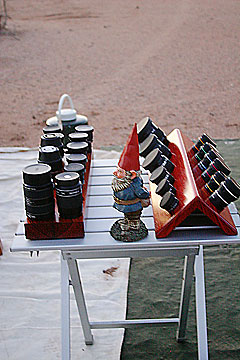 Starting the evening off by missing M74, M32 and M110, took some of the wind out of my sails. But I did my best to shake it off. The time I spent trying to acquire them put me seriously behind schedule, and the sparkling delights of the Winter Milky Way didn’t make it any easier to catch up. Most of the open clusters were breathtaking as usual, and it was difficult keeping the sketches loose, simple and fast. As I logged the time for each drawing, I celebrated the objects that took 3 minutes to find and draw while coaching myself on the ones that took more than 5 minutes.

As the evening deepened, the desert took on a nice chill, and I realized I really needed to put on my warmer clothes. But I didn’t want to break the momentum I had going through the rest of the open cluster bonanza. By the time I reached M67, my head was aching from the cold and my fingers were starting to get stiff and numb. Once the balaclava, heavy jacket, ski pants and snow boots went on, I felt renewed. A few fig newtons and some coffee got me rolling again.

The Virgo Cluster was a blast. Nudging a degree here and a degree there to hop from galaxy to galaxy got things rolling at an excellent clip. Doubling up several objects into single sketches was also a nice bonus. Sadly, after a few objects, I made a spastic move and spilled my coffee. The ensuing five minutes of table & checklist wiping ate into the progress I was making, and I put a lot of effort into chastising myself for not securing the cup in my lawn chair beverage holder.

By 2 am, a deja-vu inducing flotilla of clouds tore into the rising Summer Milky Way. I spent the rest of the morning hours fighting for every globular cluster in Sagittarius. The worst part was trying to latch onto the last six objects as astronomical twilight began to eat into the sky. The high cirrus kept them all in no-man’s land and the lengthy right-angle sweeps from Alpha Capricorni, Epsilon Pegasi, and Jupiter kept leading to nothing. I rotated among these jump points until I whittled away M55, M75, and M2 through random thinnings in the cloud-veil. The other three–M72, M73 and M30–simply faded away with the blazing twilight. And that was that. 104 objects sketched. A full 110 will have to wait for another year.

Although I didn’t hit my target, I was excited to have broken 100 sketches. It also proved to me that I could definitely sketch all 110 in one night–as long as I could actually find every single one. I’ll definitely try it again at the next good marathon year. Anybody want to give it a shot too? You can see the scanned sketch sheets and a blank template below.

7 Replies to “2009 All Arizona Messier Marathon”