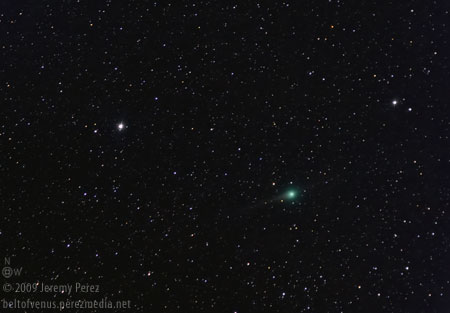 Comet Lulin is approaching opposition on February 25, so that leaves a very small window to observe its fantastic anti-tail structure. After opposition, both dust and ion tails should be overlapped on the east side of the comet. I had planned to do a marathon Lulin sketching session Friday night, but the clear sky clock warned of an impending blanket of killer cirrus. So I hit it last night and I’m really glad I did. It was absolutely stunning!

At 1:00 AM, I left for Sunset Crater National Monument, and arrived at Cinder Hills Overlook at about 1:30 AM. I brought my 8 inch Dobsonian, 15 x 70 binoculars, and my SkyView Pro mount for photography. While setting up my equipment, I kept glancing at Virgo to see if I could spot the comet naked eye. I noticed a soft smudge midway between and west of Porrima and Eta Virginis. I had a hunch that was the comet. A quick look with the binoculars confirmed the naked eye view. (More on what the binocular view looked like in a moment.) Slightly blurring my vision made the comet appear similar in magnitude to Chi Virginis–making it about 4.8-5.0 magnitude. After making a quick observation & measurement of Porrima with my SkyView Pro 6″ Newtonian, I removed the telescope, attached & focused the camera and started taking exposures of the comet. While the camera was busy absorbing the comet, I worked on a naked eye sketch which you can see below:

Astrophotography is horrible for dark adaptation, but the comet punched through that for my naked eye observation. I finished that sketch about the same time that the 11° F temperature killed both of my camera batteries. The comet moved significantly in each of the 10 minute exposures, so I also shot some 5 minute exposures to help merge a sharper composite image. The finished photo (at the top of this post) is a combination of the stationary star field, with a combination of stacked comet images aligned over the position of the comet on my second exposure (taken at 09:40 UT). Below are photos showing both the trailed star field and the trailed comet. I couldn’t get an aligned image of both without compositing them as described (unless I could find a way to take a single, one-minute exposure of the comet with an outstanding signal to noise ratio). 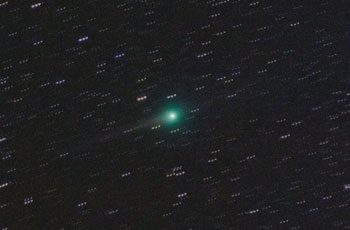 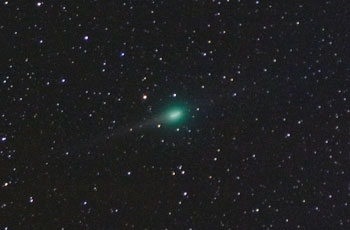 Once my camera was cold and dead, I moved on to the binoculars. I set up the mirror mount for comfortable viewing and began sketching. The linear structure formed by the tails on both sides of the comet appeared very strong at first glance, like a softly glowing horizon with a subdued but lustrous sun rising in the middle. Trying to pin down position and size on the eastern dust tail was wonderfully straightforward. The ion tail however, was still more of a horizontal suggestion than a definite structure. Despite that difficulty, it definitely appeared longer than in my previous sketches.

At this point in the apparition, the ion tail appears to be getting shorter photographically as it gradually swings behind the comet. However, it’s visual appearance has apparently been getting more enhanced. The increasing magnitude surely helps, but I think help is also coming from a foreshortening effect. The end result is that it looks longer visually even though it should be getting shorter. Determining how long it extended was also difficult due to some brighter stars in the area. I find it all too easy to overextend a structure when there are notable stars laying in its potential path. Hopefully I didn’t take it too far. The binocular sketch can be seen below. Because I used the mirror mount, I have mirrored the sketch back to a right-reading presentation.

Finally, I worked on a telescopic observation with my 8-inch Dobsonian. It was wonderful to see how large the comet had gotten since my last sketch. I had to use my 32 mm Plössl for a magnification of 37.5X, and an 88 arc-minute wide field. The comet’s tails overflowed the view and the coma blossomed to an apparent size of about a degree. The brighter inner coma was about 20 arc minutes in diameter, and possessed a stellar condensation at this magnification. Taking a detour with the Pentax XW10 eyepiece and a 2X barlow gave me a magnification up to 240X. This gave a better look at the central condensation which now appeared as an extended object, perhaps about 4 arc seconds in diameter.

Returning to low power, I worked on the sketch seen below. The dust tail was magnificent and filled the entire field even when I moved the core of the comet out of the way. The northern side of the tail appeared heavier. The ion tail was very troubling to pin down. The side of the field west of the coma was lighter, and I could see a main axis to the tail dragging away in that direction. However, a nagging light area kept drawing my eye on the north side of the ion tail, close to the coma. I wondered if any nearby stars were creating an illusion, but it was persistent, so I included it in the sketch.

Checking some recent photos when I got home show that the ion tail is exhibiting a wider fan shape as it foreshortens, so this is likely what gave me so much trouble, and why I saw the wider extension on the north side.

This really is a fascinating comet. If the weather cooperates, I’d love to see what the tails look like on Feb 25–I’m wondering if the ion tail will look like a splatter or odd set of splines surrounding the coma. If you have access to a dark sky and a merciful reprieve from clouds, be sure to take advantage of this new moon to put an eye or two on it.