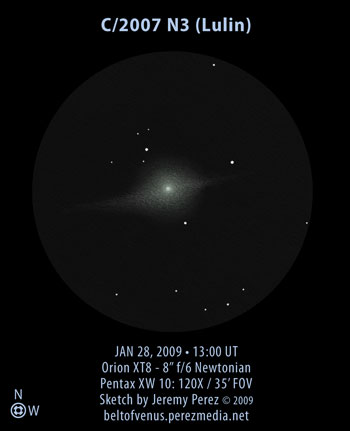 I took a couple minutes to attempt a more attentive magnitude estimate. With my 32 mm Plössl, I defocused at low power and compared it to a couple nearby stars. The comet appeared brighter than HIP 75532 (vMag 7.74) and fainter than 28 Librae (vMag 6.15). It was a bit closer to 28 Librae in magnitude, so I would estimate the comet at 6.8 magnitude. That’s a significant difference from my rough estimate earlier in the month, but it still makes for a great, bright telescopic comet.

If you are observing the comet with a telescope under skies that are even slightly compromised, the tails will likely be very difficult to see. Under excellent conditions at Sunset Crater National Monument this morning, they were still very subtle. The coma, however, is readily visible and should still provide a nice view of the comet even if the tails don’t show up. I’m still looking forward to its appearance at opposition in February when it will swing by at a reasonable hour of the night. Check The Skyhound Site for a current finder chart and be sure to look this comet up!