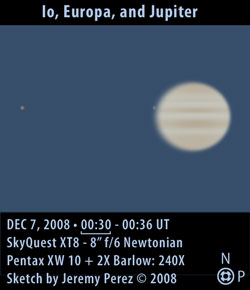 Move mouse over sketch above to view Europa’s motion.
Click for larger version.

I brought the telescope out at sunset to view the moon and Venus with the kids. I tried to locate Jupiter in the still-bright sky with no success. I went inside to check Starry Night Pro to get a better relative position of Venus to Jupiter when I noticed a transit of Europa was due in another 20 minutes. With a better idea of Jupiter’s position, I was able to find it and noticed Europa about to plunge into the planet’s disc.

Europa was entering Jupiter’s softer, shadowed side, so it was difficult to tell when the moon first entered the Jovian profile. I estimated first contact at 5:30 pm local time (APR 7, 2008 – 00:30 UT). It’s funny how at this stage, Europa looked like a zit on Jupiter’s wide, fuzzy cheek. Six minutes later, the moon finally seemed to melt into the planet. Not much further to the east, the bright, ruddy spot that was Io, also made progress against a denim-blue sky toward a transit of its own.

Europa’s shadow was due to begin a transit 40 minutes later. I tried to view it, but by that time, Jupiter was too low and the view much too blurry to make out any hint of a shadow. It was still an enjoyable, and in my opinion, impressive event to witness. The above image is a digital sketch based on a rough drawing that I did on the back of a used envelope.