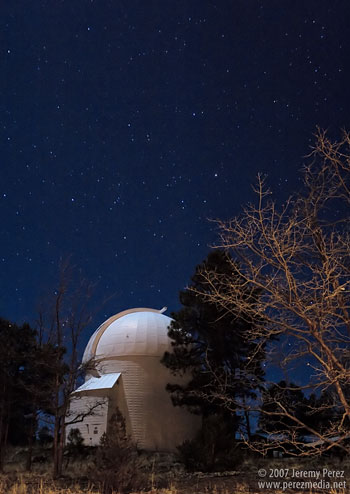 Situated on the west side of the Lowell Observatory Mars Hill campus is a picturesque telescope dome nestled in the trees. One night last year, I shot a photo of it lit by a waxing moon and nearby sodium vapor light. Auriga can be seen setting just over the dome. I wasn’t able to determine the identity of the dome or its contents online.

I contacted Brian Skiff last week, and he pointed me to an article in the March 1985 Sky and Telescope by Art Hoag. The article “An Astrometric Lens Caper” details how the dome came to house an 18″ astrograph. The f/8, 5-element aerial camera lens was made by Perkin Elmer in the late 1950s. It was later acquired through government surplus by a priest in Wisconsin. While searching for an astrograph lens candidate, Art Hoag tracked it down via an ad placed in Sky and Telescope. He and Robert Millis drove a small pickup truck on a 4000 mile trip to pick it up and put it to use plotting occultation paths for asteroids. The astrograph is still used by the observatory to create precise star catalogues that are used to identify occultation candidates in the hunt for Kuiper Belt Objects.

Brian notes that prior to the astrograph’s installation, the dome housed a 20-inch triplet refractor in the 1960s. The astrograph is now installed on the 20-inch refractor’s pier.