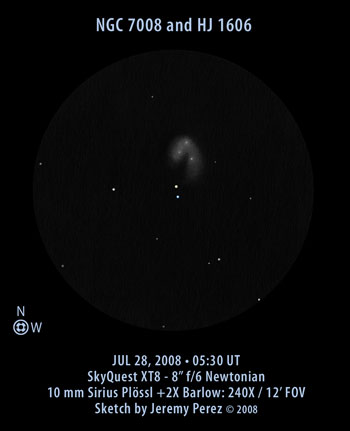 This fascinating planetary nebula was pleasantly large, and easy to spot with my low power eyepiece at 37.5X. I could see no color in the nebula, but there was some color right next to it in the double star HJ 1606. The primary of this double was a subtle, warm ivory, while the secondary was blue. The nebula had a comma or ear-like shape, formed by a dark intrusion entering from the south-southeast. It also appeared lumpy and enmeshed with faint stars. Those stars gave an initial impression of a highly unresolved open cluster. What appeared to be three stars at first, turned out to be only two. After some examination of astrophotos, the northernmost “star” appears to be a highly condensed bright spot in the nebula. A look at Wes Stone’s gallery shows that he too detected this area as star-like in this excellent sketch: NGC 7008 – Wes Stone

This colorful double, and fascinating, unusually shaped planetary nebula make for a great pair to observe on a warm summer night.