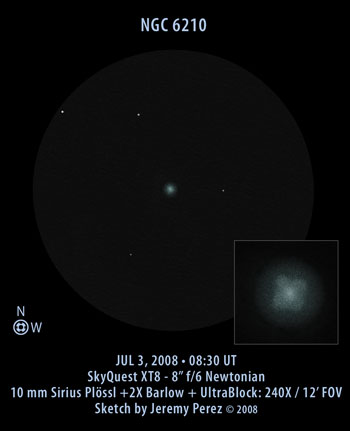 Persistent clouds were making it exceptionally difficult to sketch the core of M16. So I took a break and decided to look for something in a part of the sky not dancing with clouds. Hercules was in decent position, so I scanned my SkyAtlas 2000.0 for something in the vicinity and picked out this beautiful planetary nebula.

It showed up as a non-stellar, blue-green object at 37X and took magnification well. I really could have used more power than 240X. It held on to its blue-green color at high power, and appeared to have a faint outer halo surrounding an irregular inner core. These irregularities gave this nebula the appearance of a rectangle with rounded corners or nodules. These corners appeared at the 1:00, 5:00, 7:00 and 10:30 positions as seen in the eyepiece. The core was not stellar, but slightly brighter.