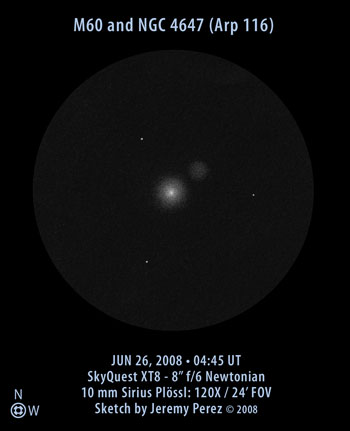 Through my 8″ Dobsonian at 120X, M60 was located in the center of an equilateral triangle of stars. It had a stellar core with a smoothly fading luminosity profile. To the northwest at a PA of about 300 degrees, lay a subtle companion galaxy. OK, it was ‘subtle’ from my front yard observing spot, and probably appears more obvious from a darker location. This companion (NGC 4647) did not display any central condensation. It appeared to be about two-thirds the diameter of M60.

The large elliptical galaxy, M60 (NGC 4649), lies about 60 million light years away and has a diameter of 120,000 light years. Through amateur telescopes, its 7.4 x 6 arc minute diameter is usually only seen as 4 x 3 arc minutes. It was discovered independently by three different astronomers within 5 days of each other in 1779: Johann Gottfried Koehler (April 11), Barnabus Oriani (April 12), and Charles Messier (April 15).

NGC 4647 is the fainter galaxy immediately to the northwest of M60. Because of their proximity, Halton Arp included this pair in his Catalogue of Peculiar Galaxies as Arp 116. It is unclear whether the two galaxies are actually close enough to each other to interact gravitationally. Richard de Grijs and Alasdar R. I. Robertson used pixel by pixel examination of Hubble images in their article Arp 116: Interacting System or Chance Alignment?. Calibration uncertainties meant that they could neither confirm nor rule out interaction. However, a loop of pixels in the M60 on the same side as NGC 4647 measured about .2 magnitudes bluer than the rest. This result suggests that an “onset” of tidal interaction may be occurring between M60 and NGC 4647.