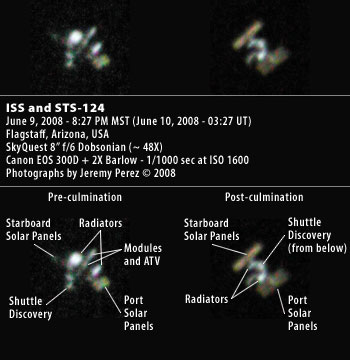 After seeing the stunning launch of Discovery the week before, I was really hoping to photograph it while it was docked to the International Space Station. We had a very good pass on Monday, June 9, with an 87° culmination. The last time I photographed the ISS, I used my 6″ equatorial Newtonian. This time, I tried it with my 8″ Dobsonian. The Dob is not equipped with a Telrad finder, so I had to use the standard 6×30 crosshair finder. It wasn’t as bad as I thought it would be. The field was wide enough to allow me to lead the ISS easily and funnel it toward the center of the crosshairs. I used a 2X barlow to achieve focus (I can’t get prime focus in the 8″ scope either), and this also gave me a larger image scale. I set the Canon 300D exposures to 1/1000 second at ISO 1600. The difficulty I ran into this time was getting the remote shutter release to fire the camera when I wanted it. I missed several good overhead shots because the camera didn’t fire quickly enough.

Still, a few shots did come out fairly well, and I spent some time trying to identify the shuttle. That’s where I got lost. My images are too fuzzy to be able to clearly identify the aspect of the space station or any recognizable shape in the shuttle. The fact that the solar panels change orientation makes it even more difficult to compare the photos to NASA imagery. Fortunately, I was able to pose the question to Ralph Vandenberg, who takes incredibly detailed images of orbiting satellites and who has a much better feel for the geometry of the ISS. He helpfully pointed out where the shuttle was in both images shown above. The first photo shows the pair prior to culmination as they approached from the northwest. The second photo shows them after culmination and heading off to the southeast. I got zero shots when it was almost directly overhead due to a fantastic struggle with Dobson’s Hole, and a camera that would not shoot when I wanted it to.

Credit for the labels on the image above goes to Ralph Vandenberg–without whom I would have no idea which blob was what.