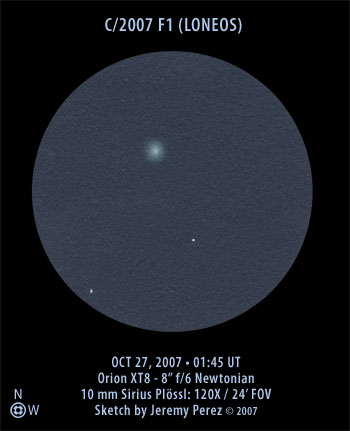 Move mouse over sketch above to view labels. Click to view larger image.

I’ve had a horrible time finding this comet from my house and a nearby road the last few evenings. I don’t have a great western horizon in this part of town. The comet had finally moved far enough south to give me a few precious moments with it before it slipped behind the trees and roofs. I found it first with my 15 x 70 binoculars from the back yard. I had to hustle to find a place where the 8-inch Dob could still see it from its lower point of view. (The sidewalk by the street worked.) The comet had a nice aqua color that was most noticeable at low power. It formed an obtuse right triangle with two other nearby stars. The core was concentrated, but the low-altitude seeing would not permit me to tell if it was stellar or not. The background of the view was filled with blue-gray twilight.

There was barely enough time to make a crude sketch before it sank out of view. I was not able to spend time estimating the visible dimensions of the coma unfortunately. I did take a few minutes to re-draw it indoors so it was a bit more presentable. This poor comet is really dropping off everyone’s radar with 17P Holmes going nuts. Hopefully I’ll get a couple more days to track it before it leaves us for the southern hemisphere.