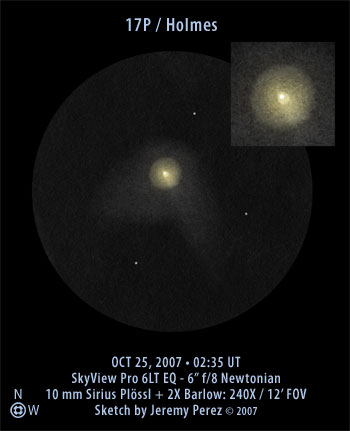 Have you ever seen a golden comet? The thought had never occurred to me–until tonight.

Earlier today, reports started arriving that observers in Asia had noted an extraordinary outburst in periodic comet 17P / Holmes. It had gone from 18th magnitude to 8th magnitude when it was first noticed. Within hours, it had became a naked-eye comet at 3rd magnitude and was still brightening. Observers were initially reporting a stellar object with a yellow or golden color. I was interested to have a look at a ‘stellar’ comet and start tracking it’s motion through Perseus. What I got was so much better.

After photographing an overhead pass of the International Space Station followed by the Space Shuttle…and a failed attempt to re-acquire C/2007 F1 (LONEOS), I got ready to check out 17P / Holmes. It was easily visible to the naked eye despite the moonlit sky. Through my 6 inch Newtonian, it was shockingly beautiful. It was not stellar at all. It looked like a wonderfully bright planetary nebula–a golden-yellow planetary nebula! I bumped up the magnification to 120X and it looked even better. It begged for more, so I gave it 240X and settled in for a nice long look. There was a very strong, almost stellar central condensation. Outside of this was another bright condensed shell about 6 arc seconds in diameter, but elongated away from the center at a PA of about 210 degrees (southwest). Further outward was another shell that was roughly circular, about 1 arc minute in diameter, with a distinct outer boundary. Outside of this was a faint, hazy outer halo about 2 arc minutes in diameter that had a broad extension at a PA of about 120 degrees (east-southeast)…perhaps this is a developing dust tail? There was also a sharper extension that matched up with the direction of the inner condensation at 210 degrees and extended about 4 arc minutes…maybe a developing ion tail?

I’m getting ready to go back outside and make some follow-up observations, sketches, and hopefully a couple photographs. I had no idea I’d get to witness something like this less than a year after the unique display put on by C/2006 P1 (McNaught). My daughter even got in on the observing and made her own sketch of the comet through our new 8 inch Dob while I worked on it through my trusty 6 inch scope. More to come!

After posting this report, I went back out and shot some photos of the area. Below is a stack of 5 2-minute exposures. Move your mouse over the image to see labels and click the image for a larger version. The golden color of the comet is apparent in the image — to which I applied no color enhancement, only contrast, dark subtraction and sharpening. 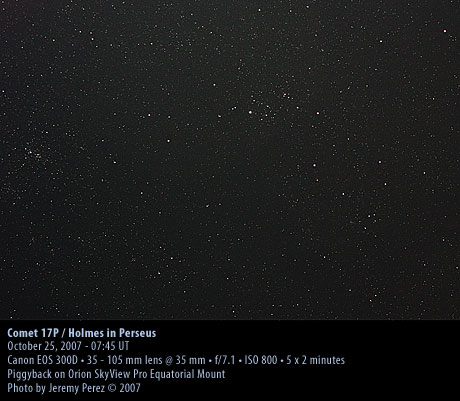