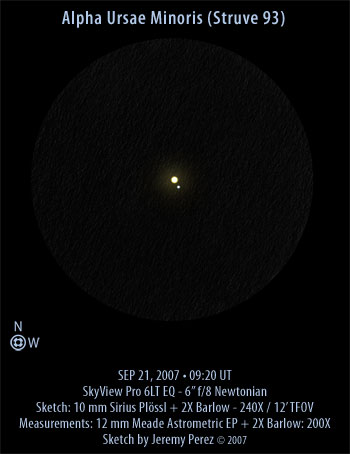 Just because I’ve known Polaris was a double star all along doesn’t mean I’ve taken the opportunity to point my telescope at it. Until now. And it turned out to be a nice one. The difference in magnitude as fairly large, but because of the wide separation, it’s simple to observe–even with the primary’s diffraction spike running over the secondary star. The hard part was aiming an already polar-aligned scope at it. Moving the tripod away from true north would have solved that problem, but I wanted to do it the hard way just to see what it was like. Not bad really. The primary was yellow, and the secondary appeared dull blue.

Using the astrometric eyepiece, I measured a separation of 18 arc seconds, which agrees well with the 18.4 arc second WDS value for 1973. Measuring PA was much less accurate. I didn’t have time to let the stars drift at a glacial pace through the field to determine east-west. Instead, I relied on my polar alignment and twisted the declination knob to get a line on north-south…which would only be as accurate as my initial polar alignment (reasonably good, but far from perfect). Anyway, that led me to a PA of 210 degrees or 30 degrees, depending on what was true north. Measurements available from Vizier aren’t much better. PA from 1820 WDS is 210 degrees; 1973 WDS is 216 degrees; 1955 Hipparcos is 218 degrees; and some recent values on websites that aren’t clear about the sources list 233 degrees. According to Burnhams Celestial Guidebook, PA is changing very slowly for this pair–on the order of about 2 degrees per century. So these variations must simply be poor measurements. I’m inclined to go with something near the 1973 WDS and 1955 Hipparcos values from 216 to 218 degrees.