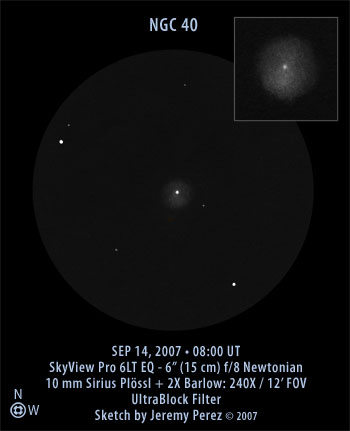 Move mouse over sketch to see the NOAO photo demonstrating how my perception of brightness differs from the actual structure of the nebula.
Click the image for a larger version.
Rollover photo courtesy of Steve and Paul Mandel/Adam Block/NOAO/AURA/NSF.

At low power, the hazy appearance of this planetary nebula was not difficult to see. At 240X, it appeared circular and fairly even in brightness. The central star was prominent, and another field star hovered about 1.2 arc minutes to the southwest, with the nebula extending about halfway to this star. So I’d estimate a diameter of about 1 arc minute for the nebula itself. With scrutiny, I thought that the south to southeast quadrant appeared subtly brighter. Checking astrophotography afterward showed this to be a questionable observation. The rollover on the sketch shows a photo overlay from the NOAO demonstrating the difference in structure. Perhaps another look from a darker sky sometime would help with that.