On Sunday (AUG 19, 2007), Space Shuttle Endeavour (STS-118) undocked from the International Space Station a few days ahead of schedule. This was to allow them to return from orbit before Hurricane Dean could threaten to depopulate Mission Control in Houston. One of the seven occupants of the Shuttle is Barbara Morgan, the teacher who was Christa McAuliffe’s backup when Challenger was lost. Twenty-one years later, there she was, soaring overhead. This early undocking provided Arizona with a couple days of stunning flybys as two brilliant points of light sailed across the evening sky. We were able to enjoy a similar sight a couple months ago with Atlantis and the ISS. However, this time I pulled it together enough to take some photos.

On Sunday evening, the ISS popped up over the crest of Mt. Elden, shining with a coppery light. The pure white beacon of Shuttle Endeavour blinked into view a few seconds later, skiing in the wake of the space station. Giselle and Harrison seemed to be enjoying the view as much as I was. On this pass, the Shuttle appeared noticeably brighter than the Space Station. I guess that could be a result of the ISS solar panels not reflecting well from that position. About a minute after appearing, the space station gradually faded into the Earth’s shadow, followed shortly by the shuttle.

The first image below shows the view from my front yard, facing northwest. Note how brilliantly the house is lit by the industrial facilities down the road. If you don’t want to click for a larger version, see the second image which shows a close-up of the light trails. The trail to the right is the ISS, the one to the left is the Shuttle. 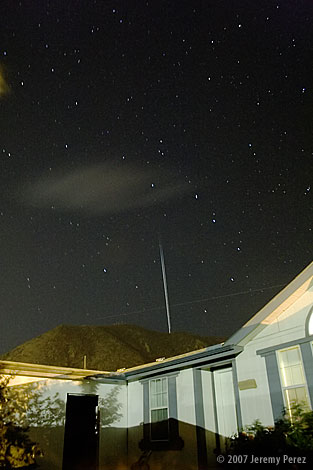 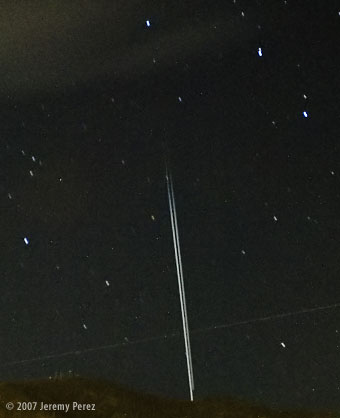 Tonight (Monday), I was able to enjoy a lengthy view of the pair passing by to the north. As they passed from the northwest horizon, through Cassiopeia, and then off toward the eastern horizon, I could really get the sense of them bending around the curvature of the Earth. The Shuttle now trailed the Space Station by about 30 seconds, and was now the fainter of the two. I had left my camera at the office, so I ended up using Giselle’s Sony Cybershot to capture short frames as the pair grooved across the emerging stars. I’ve compiled the shots into a short video: 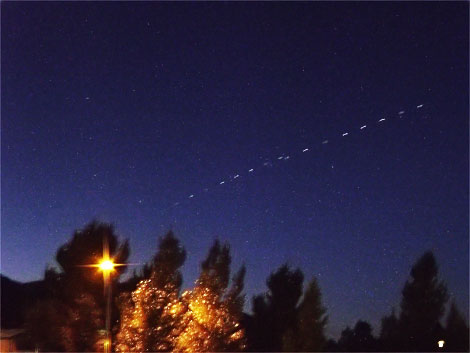 A crisp photo of the Monday flyby, taken by Chris Schur in Payson, can be found here.

If you’ve never had a chance to see an event like this, you should really check it out the next time it happens. Urban light pollution is not an issue. The Shuttle and ISS are both very bright. You just need to find out if and when they will pass overhead during this follow-the-leader phase. Keep an eye on the news, or Nasa’s Shuttle Mission Site for information on when the Shuttle is due to dock or undock. The go to Heavens Above, set up your own account, and see when the ISS or Shuttle (STS-) will appear within sight of your location. Hopefully, it will make a pass while the two are pacing each other.