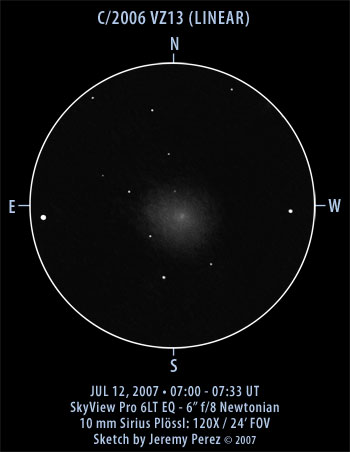 C/2006 VZ13 is a pleasantly bright comet and has been easily visible with 15 x 70 binoculars from my backyard for the last week when clouds haven’t been in the way. Telescopically, it was large (about 8 arcminutes in diameter) and softly defined. At first, I didn’t detect a noticeable central condensation, but after twenty minutes of sketching, I began to detect a concentration at its heart. This was still fairly subtle. Seeing this did however give me the subtle hint of elongation and the possible direction of its tail. I estimated a position angle of about 80 degrees. The effect was hard to pin down, so that could be wrong. The comet was moving at a fast pace from northeast to southwest, and was noticeably changing position while I sketched. Over the course of a half hour, I estimated that it moved about 4 arc minutes. I did not mark it’s second position at exactly 30 minutes however, because by that time, it was right on top of a star just southwest of center in the sketch. I gave it another three minutes, and by then, it had moved enough for me to mark without confusing it with that star. Checking my positions at home with Starry Night Pro showed the actual motion to be 4.6 arcminutes from 07:00 – 07:30 UT, for an hourly rate of 9.2 arcminutes.