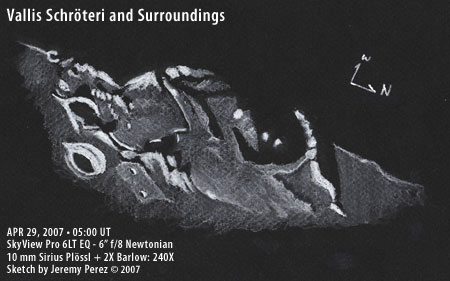 And so, in the spirit of completing one Lunar sketch and observation every 6 months or so, I present Vallis SchrÃ¶teri. On the night I made this observation, I was very impressed by the rugged terrain in the vicinity of this sinuous rille. The whole area looked like a badly skinned knee in merciful shades of gray. Although Vallis SchrÃ¶teri was the celebrity, a few other features played staring roles. Mons Herodotus shone brilliantly while the craters Herodotus and Aristarchus stared out like spectacled eyes with the teardrop of VÃ¤isÃ¤lÃ¤ glistening on the burnished cheek of a nearby highland. Further to the north, Montes Agricola embraced the region like the tip of a rattlesnake’s tail.

There was so much to observe and sketch, I couldn’t possibly capture it all. I did learn from my previous attempts at white on black ContÃ© sketching and went for a larger illustration. This sketch was prepared on a 9″ x 12″ sheet of black Canson Mi Tientes pastel paper. I used a blending stump to smooth the pastel where appropriate and to build up brighter tones. The brightest rims are straight attacks with the ContÃ© pencil. The sketch took about 45 minutes at the eyepiece with another 15 minutes of additional touch-up indoors. White on black sketching is really a great way to tackle the moon–especially the terminator. I hope to keep working at it when time permits. I’ll still be using pencil and charcoal, but it’s nice to have this method accessible when I want it.

Vallis SchrÃ¶teri is the largest sinuous valley on the Moon. Although hidden in shadow in my sketch, this valley makes its start at a 6 km diameter crater just north of Herodotus crater and widens to 10 km. This area is sometimes referred to as the Cobra’s head. It then winds 160 km and narrows to 500 m at it’s end. The rille is likely the result of volcanic activity as a lava flow carved its winding path through the landscape. Aristarchus is a remarkably bright crater with a pronounced ray system. It is 40 km in diameter and is believed to be a relatively young 450 million years old.

2 Replies to “Vallis Schröteri and Surroundings”