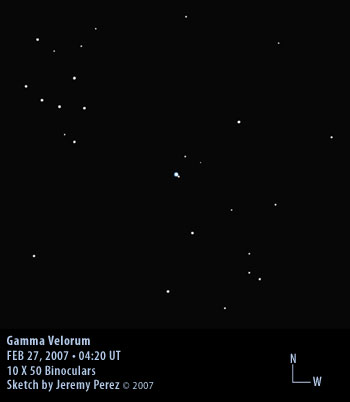 I made this binocular observation from my front doorstep with moonlight strongly lighting up the field. The primary of Gamma Velorum was the brightest star in the murky view near the horizon, and gave off a blue light. The secondary snuggled close to the glare of its buddy and at times seemed to appear orange in contrast. I tried for about 15 minutes to pick out the combined light of the third and fourth components, and couldn’t convince myself I had seen them. 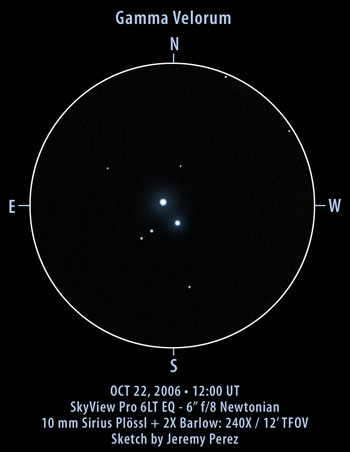 This is my most southern observation yet. At a declination of -47 degrees, it was about 8 degrees above my southern horizon–add some low hills, and I was only barely able to catch it. As you can imagine, the seeing was horrible, but despite this, Gamma Velorum was a brilliant and worthwhile multiple star to view. Due to the fluttering atmosphere, and strong spreading of the spectrum, estimating color was a bit difficult. Still, I was able to pick out a blue-white color for the primary and bluish coloration to the next two brightest stars.

According to Burnham, the primary star of this multiple is actually a spectroscopic binary composed of an O9 blue giant and a Wolf-Rayet giant that orbit with a period of 78.5 days.

One Reply to “Gamma Velorum (Dunlop 65)”