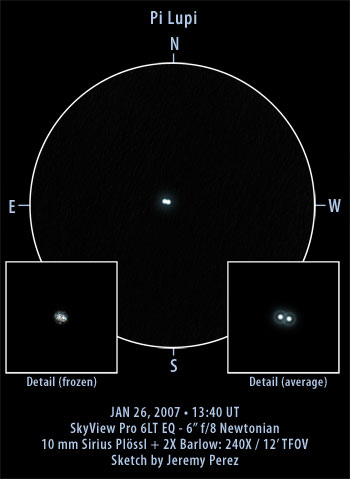 If you live near 35 degrees North Latitude, and enjoy overcoming the adversity of observing far southern objects, you may want to give the double star Pi Lupi a try. This pair rises no more than 8 degrees above the horizon where I live. Unlike Gamma Velorum, it is a fairly close double. SItting in the mush above the neighbor’s houses, I had to be very patient to catch glimpses of the two components as separate, swimming points. Discerning color was also difficult with all the distortion, but overall the pair had a bluish white appearance. I estimated a position angle of either 60 or 240 degrees, depending on which was the primary. The Washington Visual Double Star Catalog gives a 1983 value of 70.5 degrees, and a separation of 1.5 arc seconds. The sketch above contains a frozen detail to give you an idea of what the mushy view looked like in general. Clicking the image for the large version may help see that inset better.