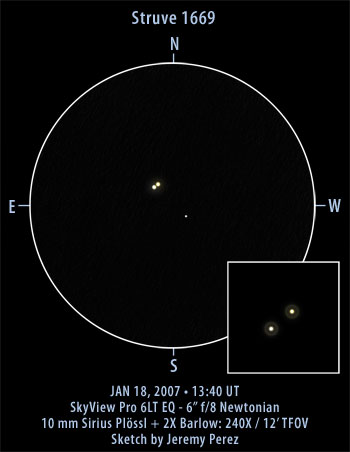 About a degree and a half south of the Sombrero Galaxy, M104, you’ll find the multiple star, Struve 1669. The main attraction here is a pair of 6th magnitude F class stars. When observing them, don’t forget to take in a third, tenth-magnitude star 1 arc minute to the southwest. The two brighter stars appeared to be separated by about 4 arc seconds, and resting at a PA of 315 degrees. Values in the Washington Double Star Catalog list 5.4″ from 1828 and 312 degrees from 1991. Color was tough to nail down, and I eventually settled for pale yellow for the northwest star and white for the southeast companion. Give it a look the next time you’re dancing around that nearby galactic hat and see what colors you perceive.