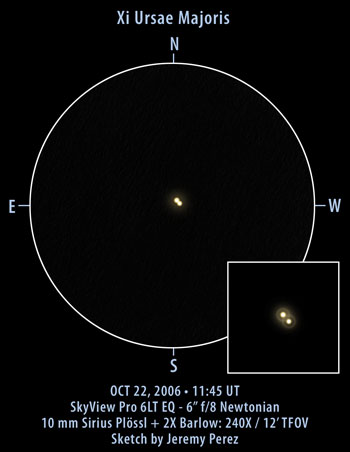 This close double consisted of two yellow-orange stars very close in brightness. The northeast component was brightest, and both stars were close to riding each other’s first diffraction rings. That would put their separation somewhere between one and two arcseconds. PA was about 235 degrees. Roughly extrapolating from the orbital predictions listed in Burnham’s Celestial Handbook, the PA should be about 240 degrees with a separation of about 1.9 arcseconds.

According to Burnham, this double was found by Sir William Herschel in May 1780. In 1804, it was announced as a physically associated pair after a PA change of 59 degrees was noted. It was the first double to have its orbit computed by M. Savary in 1828. According to T. Rakowiecki, it’s period was computed in 1938 to be 59.74 years, with periastron in 1935. This is also one of the nearest binaries to the Solar System, at 26 light years distant.