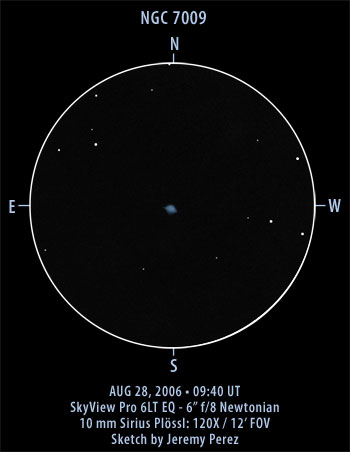 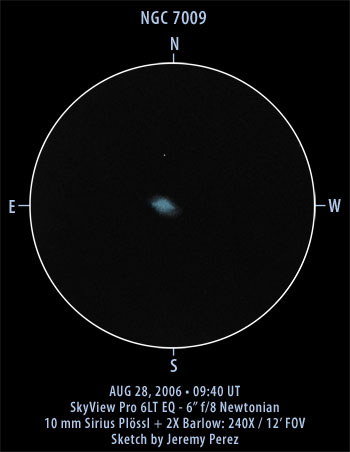 With a prominent Zodiacal Light rising in the northeast, I headed for a planetary nebula. I had a look at the Helix Nebula, but didn’t feel like re-sketching it at this point. It’s going on two years since Brent Archinal helped me find the Saturn Nebula while observing at Wupatki National Monument. The nebula shows up as an out-of-focus star at low power (37.5X). Higher power reveals an elongated bun of light with a very noticeable cyan color. Adding the UltraBlock filter helps define it better, but it is easily visible without.

Elongation of the core of the nebula runs east-northeast to west-southwest. with a thin, bright axis extending outside the main body of the nebula. The oval core appears brightest on its northern half, and there was a diffuse outer halo that misted the area around the core. This outer halo seemed to twist away and elongate along a northeast to southwest axis. The southwest stretch of this halo appeared more prominent to me. The star just north of the nebula in the 240X view turns out to be 14.4 mag. USNOJ2104088-112017. I’m wagering that Pluto would not be a huge stretch for this 6″ scope 😀