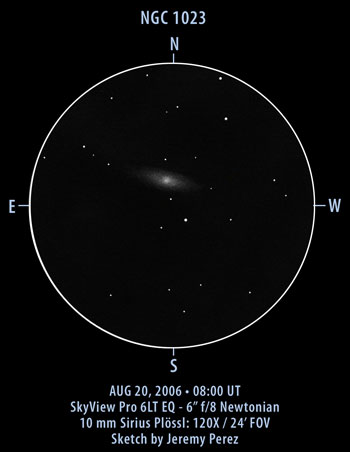 While browsing my star atlas for likely targets in the cloud free northern stretches of the sky, I ran across a reference to NGC 1023. Even at low power, while centering the view, the galaxy displayed an elongated profile. The 120X view was the best magnification, and nicely showed its pronounced west-southwest to east-northeast elongation. The core was strongly condensed, and the outer stretches were best seen with averted vision. The visible dimensions looked to be about 5 arc minutes by 1 arc minute.

NGC 1023 is an SB0 galaxy, which describes a disc shaped galaxy with a central bulge, but no spiral arms. According to Dr. Harold G. Corwin, Jr., NGC 1023 is one of the nearest early-type galaxies in the sky, and is also the brightest in a group. It has a low-surface-brightness companion (NGC 1023A) attached on the eastern end. Both galaxies may have bars, but they are indistinct on the DSS image.