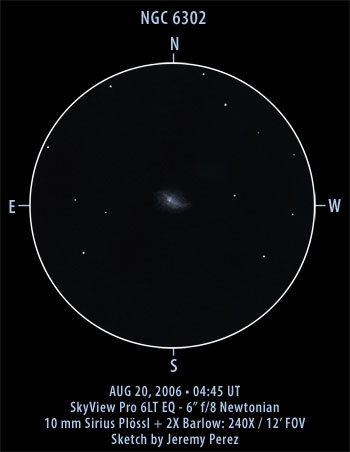 After a very lengthy hiatus from dark sky observing, I headed out to Anderson Mesa in hopes of escaping a summer monsoon cloud-out. Right on qeue though, a load of choppy strato-cumulus gushed out from some nearby storms, and I had to change my observing plans. I noticed some consistently clear sky to the far south around the tail of Scorpius and went to my Bright Star Atlas for some impromptu targets. I noticed a planetary nebula, NGC 6302, was plotted in the area. I slewed to the spot and had the pleasure to observe this very unusual and unexpected object. At low power (37.5X) through my 32 mm PlÃ¶ssl, it appeared as an out of focus star. At 120X with my 10 mm PlÃ¶ssl, it looked like an elongated smudge–almost as though someone had taken their thumb and smeared it to the west. Adding a 2X barlow brought the magnification to 240X and showed a planetary nebula that looked a lot more like a galaxy–a barred spiral strangely enough.

As I observed it, I thought I must be imagining this strange structure. Overall, the nebula was strongly elongated north-northeast to south-southwest. The western end was brighter and longer than the eastern side. Averted vision and concentration showed both ends to have a bit of a curl to them. The core was either very strongly condensed, or perhaps a central star was trying to peek through the bright nebulosity at its heart. The former assumption was correct, since it turns out that the central star is not visible visually.

After putting the sketch together, I went back to the atlas and noted that a footnote described the object as the “Bug Nebula”. I couldn’t recall if I had seen a photo of the object before, but the name itself suggested an unusual shape. Throughout the observation, lightning flashing to the north and east added sporadic illumination to the wild cricket party that was going on in the surrounding brush.

Some references indicate that NGC 6302 was discovered by James Dunlop in 1826, others (including the NGCIC Project) credit it to Edward E. Barnard in 1880. I’ve tried to dig for more supporting information through Vizier, but have so far been unsuccessful.

According to the European Space Agency, it is one of the brightest, most extreme planetary nebulae known. At its heart lies an incredibly hot star blazing at 250,000 degrees Celcius. This central star shines brightest in ultraviolet and is hidden by a shroud of dust that makes it difficult to observe. The nebula itself contains hydrocarbons, carbonates, water ice and iron. It is estimated that the torus of dust was expelled about 10,000 years ago. Distance estimates range from 685 light years (Phillips, 2002) to 1,858 light years (Zhang, 1995).