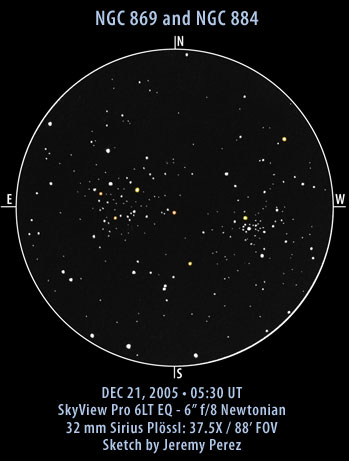 This is another sketch that I ended up refining recently. I wanted to make the weights of the fainter stars less bold to provide a better sense of variation in stellar magnitude that is apparent through the eyepiece. This isn’t a new observation, just a redraw. I traced the original (holding up to a well-lit window 😀 ) and then put a bigger spread on boldness by plotting more delicate faint stars.

[edit July 14, 2008: Note that I’ve added a digital version of the sketch at the top. I’m keeping the original redraw here as well, since I like it for other reasons.] 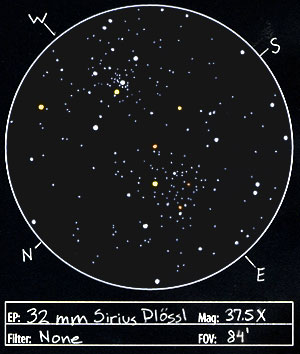 I’ve been observing this pair of clusters on a regular basis since I first started messing around my telescope. The first time I checked them out, I was struck by a trail of stars that arcs away to the north, like a fishing line. They are great in binoculars too of course. But it’s always nice to pick them out naked-eye. Although I have trouble with astigmatism on individual stars, I am able to make out the two clusters and their orientation without optical aid under a nice, dark sky. All this time, I’ve been holding off making a sketch, because I knew it was going to be a toughie.

Well, this night, I finally went for it. I made the observation from my front yard after most of the neighborhood Christmas lights had been mercifully shut down–especially Santa’s After-hours Sweatshop next door. The Double Cluster in Perseus is a beauty and fits perfectly in the 1.4Â° true field of view provided by my 32 mm plÃ¶ssl. There is a little heiroglyphic character at the heart of NGC 869 that always catches my eye. And the orange and yellow-orange stars pop out right away. Both clusters are roughly circular, with NGC 869 having a brighter, more condensed core, while NGC 884 is looser. The sketch was tough. I nailed down the brightest stars–about 16 of them. Then I started on the core of NGC 869. After that, I worked clockwise from about the 11:00 position for the rest of the view. The moon started to rise about the time I was in the middle of NGC 884. Phew! It was tight timing. Discerning the colored stars I saw at the beginning was more difficult afterward. It was still hard to see color, even after staring at the moonlit house siding to restore photopic vision (as if I lost any of it in this scintillating realm of stray light). The stars I did finally note seem to match up well with astrophotograph comparisons I made afterward. OK, except for the yellow star I marked in the middle of NGC 884 that should just be white apparently…