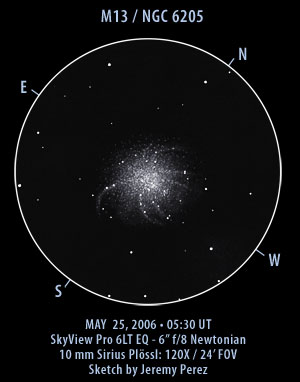 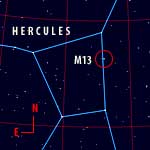 Well, the time seemed about right to redo the sketch of this amazing globular cluster. Visually, the cluster displays curving arcs of stars that give it the appearance of a hanging fern, or even a crawling spider. Stars, faint to bright, were resolved right across the surface. Averted vision revealed a granular halo that extended across a diameter of about 9 to 10 arc minutes. The brighter stars marked within the cluster were deliberately plotted when I sketched it. The fainter shading and stippling are not intended to represent individual stars, but to mark the grainy clumps and strands of flickering starlight.

This sketch turned out to be incredibly challenging for the level of detail I wanted to pick out. I’m still a little dissatisfied with what I was able to portray in the very inner core region. But I think maybe next time, a 240X sketch may be in order to better resolve that area. This was a great night to watch the rising Summer Milky Way. It was visible down to about 10Â° above the horizon and was pretty ominous. The Pipe Nebula and its ‘E’-shaped surroundings were readily visible along with other very detailed knots and clumps, including M24, M8 and others. This was the first night I tried listening to my iPod while observing. I have to say it really helped me to focus. I was much less concerned about rustling noises in the grass and trees during the sketch. I was still buzzed by a bat at one point, but the bats I can stand.

M13 is one of the most prominent Northern Hemispher globular clusters. Discovered by Edmond Halley in 1714, it was later catalogued by Charles Messier in 1764. It is 25,100 light years distant and 145 light years across. M13’s age has been estimated at 14 billion years. In 1974 it was selected as the target for one of the first radio messages addressed to extraterrestrial races, sent by the Arecibo Observatory radio telescope. 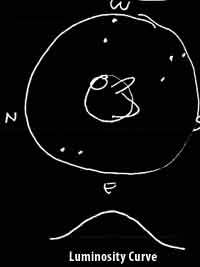 After spending time on M54, M69 and M70 in Sagitarrius earlier in the evening, M13 was a treat. It’s a huge sherical, bright globular. It showed granularity at 37X, and stars resolved across the surface at 120X. The light distribution was was soft but bold. One spoke of luminosity seemed to point to the SSE and another pointed to the SW. There also appeared to be a detachment of stars on the W side.