Way back on November 5th and 6th, 2005 I shot a few images along the Winter Milky Way. This one was centered on the constellation Canis Major. Like the Orion Milky Way image, I put this one off due to processing issues. Since the shot goes right down to the horizon, there was a lot of sky gradient work that needed to be done. I couldn’t get rid of it all without some really bizarre effects showing up. Along the tree line, you’ll see what the City of Phoenix can do from 120 miles away. Speaking of the tree line, the trees were blurred in all the long tracking exposures, but I also shot one still exposure to capture a steady horizon. That was merged in separately so I could have my cake and eat it too. 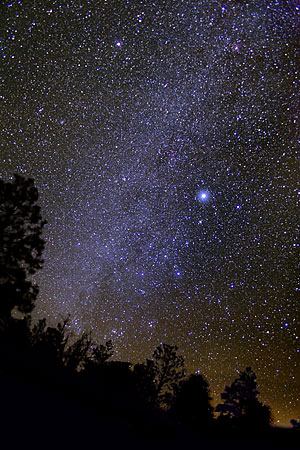 Clicking this image will take you to a larger image that has a rollover graphic showing labels for visible DSOs and constellations. (Combined size of the image and rollover is about 550K.)
I’m really getting irritated by the purple fringing I get around the brighter stars. It gives an unnatural color to everything. A number of options were suggested to me, including: 1) Using a smaller aperture to reduce aberration, 2) Investing in a minus-violet filter, and 3) investing in a good quality fixed focal length lens. Number 3 is the best bet, but it’s also out of the budget for the foreseeable future. Number 2 is a more affordable (about $60) option, but without testing it first, I’m not positive if it would help enough to be noticeable. Number 1, I can try out the next time. But I’m going to have to at least double my exposure time/number of exposures, to dig as deep as these shots do. One example of a smaller aperture shot I’m happy with is this close-up of Orion I shot over a year ago. The purple flaring was controlled much better, and the brighter stars bloomed with some diffraction spikes that I’m pretty fond of.
Also, if you like wide field shots as much as I do, check out this amazing image by Dan Duriscoe of the National Park Service. There are a couple of things in particular I appreciated about the shot. First, he used a very wide angle lens to capture the Milky Way, and that really did it justice. He also desaturated it to remove all the varied color, and I think that gave it a more realistic naked-eye appearance. About a year ago at Anderson Mesa, I watched the Summer Milky Way rise over the trees, and that’s the majestic impression it gave. Wow. Also, I’m assuming that he composited the still foreground shot with an extended, tracked exposure of the sky–and did a fantastic job with it.
So, here’s to the Summer Milky Way!