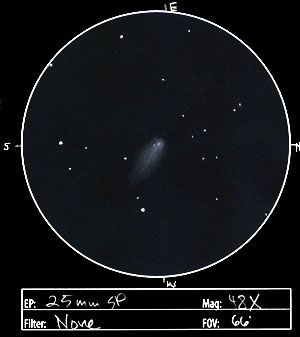 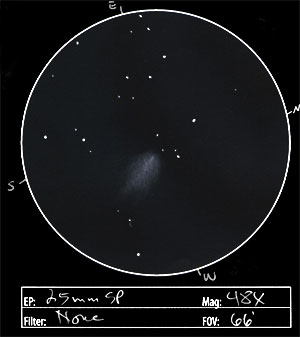 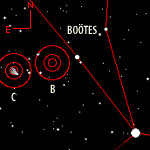 I was very happy to find the two brightest components of the comet tonight. While component C is tracked by my planetarium software, the rest aren’t. However, a couple very helpful finder charts have been posted by Greg Crinklaw and Bill Ferris. (Be sure to check out the link to Bill’s site for some excellent sketches and observation notes made his 18″ scope the the same night I made this observation.)

Component C was strongly condensed with a stellar pseudo-nucleus that held this appearance even at 240X magnification. The coma appeared about 3′ wide, with a 10′ long tail. The tail was fan shapedâ€”about 30Â° wideâ€”and pointed southwest. During the first observation and sketch, the pseudo nucleus was very closeâ€”maybe about one arc minuteâ€”from another star of similar brightness. I made a second observation 85 minutes later that revealed motion to the northeast of about 2.5′. That worked out to 1.75’/hour of motion. My planetarium software gives an actual motion of 2.07’/hour for that time period.

Component B seemed to have an overall brightness comparable to C, but larger and much less condensed in the coma. So it was not as easy to see at first glance. The coma was about 5′ wide and the tail about 10′ long. The fan shape of the tail was much wider than the other fragment, appearing to be about 70Â° wide. Although the core was not highly condensed, higher magnification (240X) revealed an elongated streak of brightening pointing northeast to southwest. This elongated nuclear region has been reported after the outburst this fragment underwent, and may represent the disrupted remains of the fragile nucleus. Whether this nucleus will remain intact much longer remains to be seen. Due to the rising moon, I wasn’t able to spend enough time on this one to track motion.

An hour after moonrise at 9:30 PM, both components had held their own well enough to still be visible, but details were hard to come byâ€”especially for component B. I made a search for the R and G fragments, but came up empty-handed. Although the outburst of the B fragment has brought it to the same brightness as C, the C component is not brightening as rapidly as originally hoped. It looks to be headed for 4th magnitude rather than 3.5…but you won’t hear any complaints from meâ€”that’s still great.