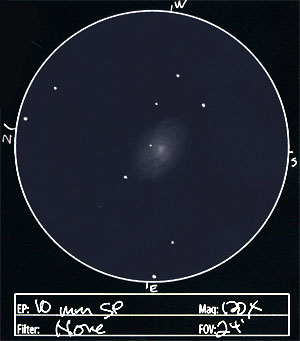 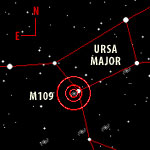 I didn’t pick up a lot of detail in this galaxy. It displayed an elliptical shape with a strongly condensed core that almost looked double in nature, due to an overlapping foreground star. The galaxy was elongated west-southwest to east-northeast, with a core that seemed to push northwest to southeast. I estimated its dimensions at 2.5′ x 4′.

M109 is a barred spiral that displays a shape reminiscent of the Greek letter Theta. It is about 55 million light years away and receding at 1,142 km/sec. It is a member of the Ursa Major Cloud. It was discovered by Pierre Méchain in 1781. Charles Messier listed it under number 99 in a preliminary manuscript, but it was not added to the official catalog until 1953 when Owen Gingerich added it.