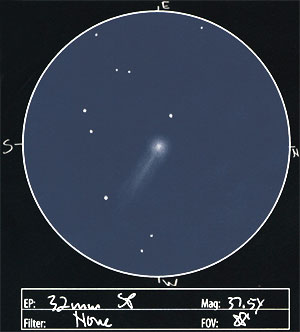 This observation of C/2006 A1 Pojmanski came at the end of an all-night observing session at Anderson Mesa. Because it was going to be fencing with the rising sun, I needed to catch it as close to the horizon as possible. This meant moving my scope when I realized it was going to come up behind a particularly expansive tree. With the western-most stars of Capricornus started peeking over the trees I began my search. It wasn’t hard to find at all. Particularly compared to comets 9P/Tempel and 2005 E2 McNaught.

I could see a fuzzy patch rising through the boughs of some distant trees. When it soared clear, it showed as a soft, beautifully glowing pearl. Its coma was bright, with a nicely condensed core. It appeared to be about 2′ across. Averted vision showed about a 20′ length of tail blowing off to the southwest. In addition to a bright, thin core, a broader, fainter fan overlapped it, and was about the same width as the coma. It took magnification nicely, and at 240X, I could see some asymmetry in the coma. The northwest side appeared sharper, with a bit of a spike on the east side. The pseudo-nucleus was not stellar at this magnification though, which could have something to do with poor seeing near the horizon. It showed up easily in 10×50 binoculars as a soft stellar object, and was just barely visible to the naked eye with approaching dawn beginning to interfere.