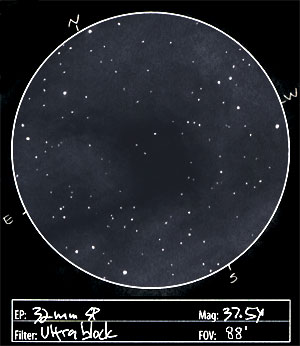 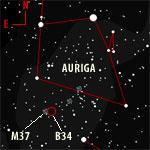 Barnard 34 lies about 1.5 degrees west of M37. Compared to some others I tried to locate earlier, including Barnard 5, this one was easy to spot. For a dark nebula. It appeared as a very soft hole in the Milky Way starlight behind it. The main body of the nebula covered about 1/4 to 1/3 of the view, which amounts to a span of 22′-30′. Bill Ferris came over for a look, and mentioned that he noticed a fan-like appearance to the left side, that I hadn’t noticed yet. After spending some time on it, I began to notice a couple dark spokes running to the northeast and east. The huge number of stars I wanted to plot really tested my patience. I was itching to shade in the Milky Way region around the nebula, but I did my best to keep a lid on it until the star framework was finished. The structures in the sketch can be compared with photography of the region that can be found here.