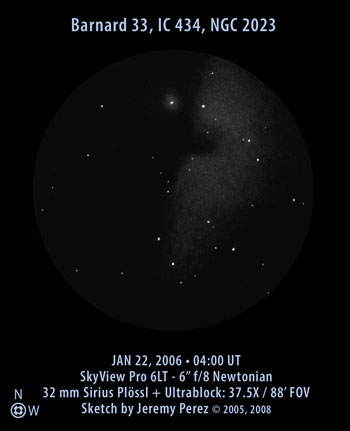 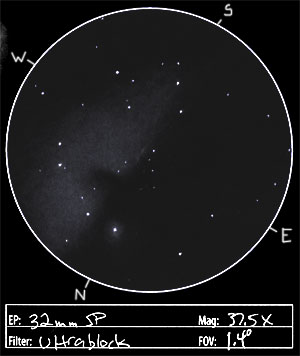 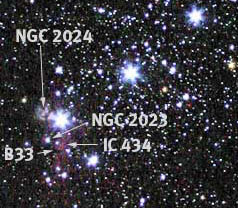 It’s been nearly a year since my first observation of Barnard 33, and I wanted to have another serious go at it. For the observation, I used my 6″ f/8 newtonian (Orion Skyview Pro 6LT EQ). As I scanned the area of Zeta Orionis, NGC 2024, The Flame Nebula was fantastically detailed, even with the glare of Z-O blazing across the eyepiece. NGC 2023, was a flocculent ball, and IC 434 was evident as a mottled haze running north-south through the field, even without the Ultrablock (~UHC) filter in place. As I let the view sink in, the shadow of B33 began to appear. I tried the view with my 32 mm and 25 mm PlÃ¶ssl eyepieces both with and without the Orion Ultrablock filter. It appeared in all views, but was best in the 32 mm with the filter in place. The exit pupil for this eyepiece is 4 mm with a magnification of 37.5 X. Unlike my first observation, I am confident in this sighting of the Horsehead Nebula, although it didn’t exhibit detail.

I’m not trying to say this observation is simple in this scope. Really, it’s like trying to see a little bit of nothing with a little bit of less than nothing resting over it. Averted vision was the only way to observe it. As my eye rested in another spot the image slowly burned in and at odd moments, certain edges of the shadow of B33 would coalesce for mere moments. The shadow was consistently there, but views of the boundaries were fleeting. Gradually these moments added up to a curved edge along the southern side of B33 (running about 40% of the way from the star marked ‘A’ to the one marked ‘B’). That portion of the dark nebula appeared the darkest. The northern side appeared softer with the barest hint of an undercut on the eastern side (see the dotted line that begins roughly halfway between the star marked A and the star marked C). This northern boundary was not distinct at all. IC 434 appeared brightest just north of B33 (most bright between the stars marked ‘B’ and ‘C’).

I have brightened the sketch so that it will appear on as many monitors as possible. As a result, the sketch is probably going to look much brighter than it should so you can at least see something. A couple folks observing at the same site came by for a look and were a bit suspicious that there was anything besides stars in the eyepiece at all–“Well, I’ll have to take your word for it,” was one comment. Heheh. I felt a bit ashamed throwing such a drab view at anybody. I guess I’ve gotten used to looking for next-to-nothing and seeing next-to-nothing in this scope. =D Bill Ferris was there that evening and he also had a nice extended look. He verified the sighting of B33 and also noted that the back of the horse’s neck was the most obvious edge. I wish I could have added more stars to the field of the sketch, but the wind was getting worse and worse and I decided to spend the bulk of my time on the nebula before I went crazy and hopped into the car to finish my notes.

Object Information:
The Horsehead Nebula, Barnard 33, is a dark pillar of obscuring dust and non-luminous gas that blocks the light glowing behind from the diffuse emission nebula IC 434. IC 434’s glow is excited by ultraviolet light from Sigma Orionis. This spectacular region is but a small portion of a much larger cloud of gas and dust 1600 light years away in the constellation Orion that includes the Flame Nebula (NGC 2024), The Great Orion Nebula (M42 and M43), Barnard’s Loop, and the reflection nebulae around M78. 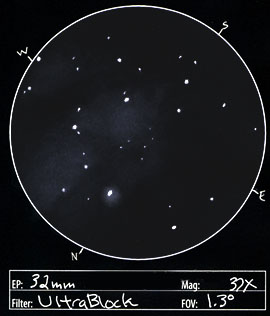 Move your cursor over this image to see labels. 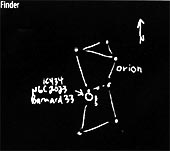 What I’m about to present will probably be met with some skepticism (and it should), particularly with seasoned observers. But here goes anyway. Please feel free to comment.

On the evening of March 9th, I was observing from the Cinder Hills Overlook at Sunset Crater National Monument. The sky was exceptionally dark, with the zodiacal light rating as noticeable light pollution in the west. Aside from that, conditions were great and I figured naked eye limiting magnitude at mag. 6.3 based on Ursa Minor. It was probably better than that, but my skill at knowing where to locate dimmer stars for estimates is still limited. These were the kind of conditions that encouraged me to try and observe the Horsehead Nebula, Barnard 33.

This nebula has notoriety for being an incredibly difficult target, even in mid-size scopes in the 10″ range. I’m using only a 6″ newtonian reflector, and I do not have a Hydrogen-Beta filter. Although dark skies really seem to be the key, along with a healthy dose of patience, the chances of being able to see it with this equipment seemed pretty unlikely. However, over the past few weeks, I’ve had occasion to positively and easily sight the nearby Flame Nebula, NGC 2024 from my front yard. One of the words of wisdom I’ve read about observing the Horsehead Nebula is to not even bother trying if you cannot see NGC 2024 on a given night. Well if I can see NGC 2024 easily from my front doorstep time after time, I figured the Horsehead Nebula was worth a try from a much darker site.

As I turned my scope to the eastern-most star in Orion’s belt, Zeta-Orionis, I immediately picked up the softly mottled and bisected view of the Flame Nebula and the brilliant glare of Zeta-Ori. I had made no effort to specifically memorize the star field around the Horsehead Nebula (Barnard 33) and it’s backdrop nebula IC 434. I figured that the first time I tried to observe it on my own, I would want to keep the observation as free from prejudice as possible. Of course it’s hardly possible to hold an interest in astronomy and not see photo after photo of this region. I knew specifically that IC 434 runs south from Zeta-Ori at basically a right angle to NGC 2024. That’s where I concentrated my attention.

To make the observation, I used an Orion Ultrablock filter with a 32 mm Sirius PlÃ¶ssl eyepiece for an exit pupil size of 4.1 mm and a magnification of 37X. As I began, I first noted the position of the enjoyably obvious Flame Nebula without the Ultrablock filter, and then moved the view southerly and at a right angle to Zeta-Orionis. I kept slewing until the blazing fire of Zeta-Ori was outside of the view. My first impression was, ok great…I see several stars, but what else? Rather quickly, a smallish circular haze made itself apparent around a brighter star in the north side of the view. This turned out to be NGC 2023, a bright reflection nebula. That was about as good as it got without the Ultrablock filter.

Inserting the filter noticeably dimmed NGC 2023, but it was still there. As I continued observing and flicking my eye across the view, a much fainter, mottled glow began to emerge flowing from the north edge of the view, up to and slightly past the center of the field. Continuous averted vision across various parts of the region confirmed for me that I was seeing the backdrop nebula to the Horsehead. This emission nebula is known as IC 434. The Horsehead notch, Barnard 33, did not give itself up, as I knew it wouldn’t. I think my major handicap was the low magnification I was using. I wanted to maximize the exit pupil to give me as much concentrated light as possible to see any glow whatsoever. The problem is this puts the small dimensions of Barnard 33 below the eye’s threshold of resolution in dim light.

As a result, what eventually did emerge to me was not a specifically darker boundary, rather a painfully vague hint of darkness in one portion of IC 434. It was not the same thing as the random, uneasy mottling I tend to see in very dim objects, instead it was more like what I jotted in my notes as being a ‘dark entity’ in the nebula. It definitely was not something to which I could pin dimensions or shape. As a result, when making my sketch, I had to approach it by sketching the range of IC 434’s luminosity, maintaining close scrutiny to how it stretched across the framework of stars, gradually letting the dark region form as IC 434 took shape around it.

On returning home, I found a photograph of the region and overlayed it on my scanned sketch. The result is posted below. Move your cursor over the image to see the photograph overlay.

What I take from this is that my IC 434 position is pretty well on target. Regrettably, I distorted the position of some south and southwestern field stars, which caused me to blunt the actual southern extent of the nebula when I shaded it in. (Those field stars are important, y’all.) As to the dark notch of Barnard 33, it looks to be in the right place, although quite a bit larger than the actual Horsehead itself. Perhaps I can credit that size difference to the fact I was burrowing in the wretched realms of poor visual resolution at low magnification. As much as I am willing to wager that I observed Barnard 33, it was still a very difficult, threshold observation and definitely open for debate. On another occasion, I think I will try my 25 mm eyepiece, or throw a 2X barlow on the 32 mm and see if I still have enough light to resolve the size of the notch better. Pipe dreams, I know…but it’s my scope, my eyes and my patch of sky, so I’ll just throw that skunk on the barbecue and breathe deep the impetuous fumes of folly 😀