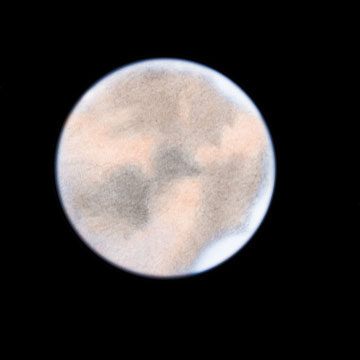 Observation Notes:
During the first half of this observation, the sky was reasonably clear, but the scope was still cooling down. A bit later, when the seeing began to improve, a thin smear of horizon-to-horizon clouds moved in. Everything got very muddy. Bah! I was hunting for evidence of a dust storm moving south out of Chryse. I think I spotted a notch it might have taken out of Aurorae Sinus. The North Polar Hood was very evident and notched.