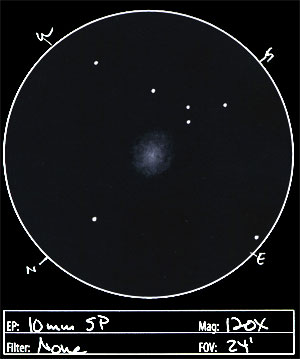 This globular had a soft profile with a mottled appearance. Granularity was hard to come by, but it was there. It appeared mainly circular and symmetrical with some faint hints of extensions.

M9 is one of the closest globular clusters to the galactic center at 5500 light years. It lies 25,800 light years away and at 12′ in diameter, it is 90 light years across. It is receding from us at 224 km/sec. Its light is significantly dimmed by interstellar dust contributed by the adjacent dark nebula, Barnard 64.

M62 was discovered by Charles Messier in 1764. It was first resolved into stars by William Herschel about 20 years later.