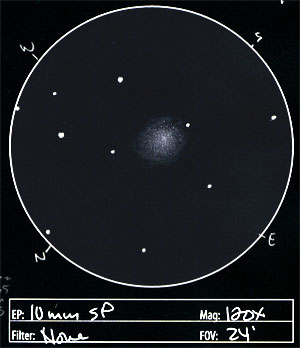 M62 was in horrible light pollution. It showed granularity without too much trouble. The core was strongly condensed and seemed to rest toward the south end of the cluster rather than centered. After a bit of research, it turns out that M62 is noted for an off-center core that rests to the southeast.

M62 is noted for its highly irregular shape. It is surmised that this is due to tidal forces caused by its close proximity to the galactic center, at 6100 light years. M62 lies 22,500 light years away and its diameter of 15′ corresponds to 100 light years across. Its core is extremely dense, and it may have undergone a core collapse.

M62 was discovered by Charles Messier in 1771, but he didn’t catalog it until 1779 when he accurately measured its position. It was first resolved into stars by William Herschel.