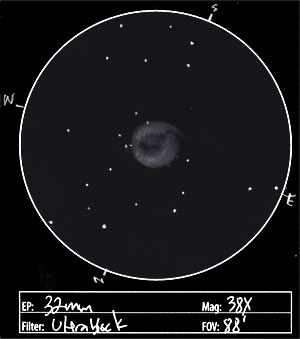 This planetary nebula is huuuge. I really needed the ultrablock to find detail. Without the filter, it was just a slight brightening above the level of the sky. Overall, it was circular with a bit of a wisp running off the southeast side. It had a hollow appearance, with the northeast side being the brightest. It seemed open on the northwest and southeast sides. Overall, I estimated its diameter at 13′. Light pollution was heavy in the area, with 89-Aquarii (Mag. 4.7) being the faintest I could see naked-eye. I’m not at all pleased with the size of the nebula in my sketch. I think I condensed the star framework in the center, which resulted in the nebula appearing smaller in the sketch than it really was. Oy. I’ll need to do this again another day. Also, I thought I detected an extension of nebulosity hanging into the middle from the southwest side, but I scrubbed it in too dark, and now it looks a bit like a bullseye. This is not quite right. Anyway, like I said, I need to do this one again.

Side note: I made another observation on the evening of September 30, 2005, from the Cinder Hills Overlook at Sunset Crater National Monument. I wasn’t ready to make a sketch at the time, but I did note that without the Ultrablock filter, the central star along with a couple others flickered in and out of view on the surface of the nebula (seeing was horrible).

The Helix nebula lies about 450 light years away, making it one of the closest planetary nebulae. Distance estimates range from 85 to 590 light years. It is also one of the largest planetary nebulae, with a diameter of 16′ for the main body of the nebula, while the outer halo extends to 28′. While bright, its large dimension keeps it from being an easy object for visual observation. There is no record that the Herschels observed or catalogued it. It was discovered by Karl Ludwig Harding before 1824.