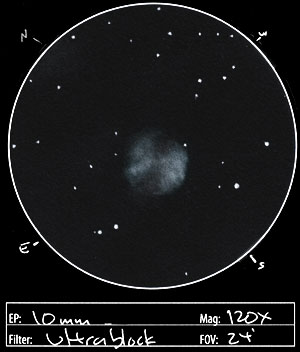 This is my second observation, a year later. The nebula is huge and bright. At first glance, it looked like a two-lobed blob. But closer inspection showed an overall oval, slightly elongated west-northwest to east-southeast. The lobes were on the southeast and northwest quadrants. The southwest lobe seemed the brighter of the two. A star rested up against the west tip of the southwest lobe. The Ultrablock filter revealed mottling in the nebula and perhaps a gap on the northeast edge. The lobes really overwhelmed the fact that there was faint, fuzzy nebulosity on the east-southeast and west-northwest sides, but it was there. I’d guess a dimension of 5′ across, visually. It exhibited a very slight blue-green color.

The Dumbbell Nebula is the expanding shell of gas emitted by a dying star. Our view of the nebula is from an equatorial perspective. If we were to view it from its pole, it would look more like a ring–similar to M57…but much bigger. M27 is estimated to be anywhere from 490 to 3500 light years distant, with 1200 light years seeming like a reasonably accepted distance. Go ahead, roll the dice–see what number you come up with. Better yet is the range of age estimated anywhere from 3000 to 48,000 years. How’s that for a spread? The central star is relatively bright, at mag 13.5, and is an extremely hot blueish subdwarf. K. M. Cudworth of Yerkes Observatory found that this central star probably has a faint (mag. 17) yellow companion star. As bright as the central star is, the nebula is so much brighter still, that the star is emitting much of its light outside of the visible spectrum. This high-energy, invisible light is absorbed, and then re-emitted by the expanding shell of gas mainly in the visible green spectrum. 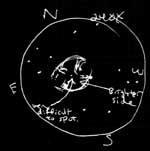 M27 is big for a planetary nebula. Its shape comes across as an apple core to me. The axis of the apple core lines up almost North-South, with the slightest twist counterclockwise. The southern portion was the brightest. The middle edge was not a smooth curve, but exhibited clumpiness, as you would expect from a partially eaten apple. I noticed a foreground or background star in the WSW edge of the nebula. The ultrablock filter really helped in seeing the shape of the nebula, but it really hurt the view of stars in the vicinity. When I switched from the 96X view to 240X using the 10 mm eyepiece and 2X Barlow without the filter, I could see the stars much better. The nebula’s shape became more elusive, but the central star did wink at me during a few moments of relative clarity while using averted vision. I thought that was pretty cool.