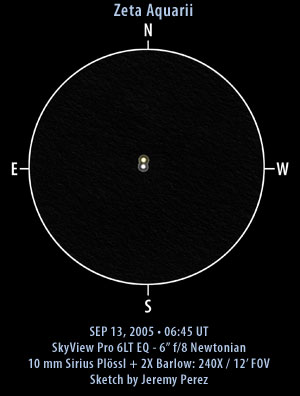 Above is the cleaned up sketch that was submitted to Sky and Telescope for the September 2006 issue. 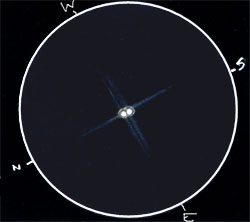 These two were so very close and perfectly similar, it was a very cool double. The PA is either 360Â° or 175Â°, depending on which star is the primary. At first, the color for both appeared to be white, but after further examination, I believe the north star is a subtle yellow. They each sat on each other’s first diffraction ring, leading me to believe the separation is approximately 1.3Â° (the actual value is 1.8Â°). The listed PA of 266Â° is vastly different than the 360/175Â° I estimated.

The sketch is deceptive. To indicate brightness, I drew the star circles bold. This made me have to push the stars apart to keep them separated. So they were actually tighter and closer in the 240X FOV than they appear in the sketch.