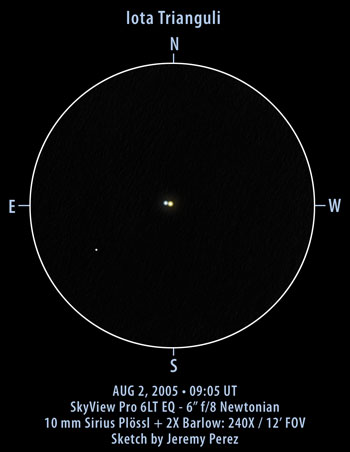 October 17, 2006: To help provide a consistent style for my double star sketches, the above sketch is a digital update to the original sketch.

This little booger took me by surprise. At low power, it looked like a single star and I thought maybe I was looking at the wrong object. Bumping the magnification, however, revealed two nice, close compadres. The primary was on the west side and was yellow, while the secondary on the east was either white or pale blue. Based on the sketch, I would estimate the position angle at 80Â° with a separation of 12″…but with my track record of overestimating separation by a factor of 2 to 3 in my sketches, I’d bet it is more like 4-6″. The actual values from the AL double star list are 71Â° and 3.9″ (heheh).