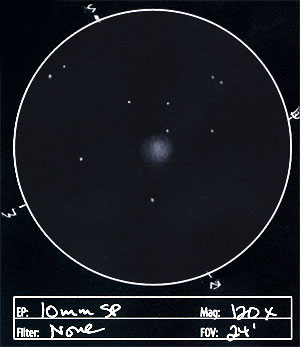 This observation was cursed! I tried observing it 3 nights prior and spent 15 minutes gandering, switching eyepieces and seeing if I could resolve it and discern any asymmetry. Before I could pick up my sketch sheet and record it, the view faded to nothing as clouds flooded in from the south. After a couple more nights of rain and overcast I tried again. Worried the same thing would happen, I got busy with the sketch as soon as I centered on the globular cluster. Just as I finished marking the brightest field stars, the clouds moved in and grayed everything out again. Arghh! I could have gone hunting for double-stars in more promising sections of the northern and eastern sky, but I didn’t want to mess up the position of the field stars I had already drawn. (The scope’s clock drive was still running.) I went inside and checked the NOAA infrared satellite view and saw that the cloud bank was local though persistent. I decided to wait it out. Finally I got a few moments of clearing and jumped on it.

The cluster did not resolve under these conditions–if it would at all. The core wasn’t quite stellar in appearance. Overall, it was soft, dim, and circular. I would estimate the visible portion I saw at 2.5′ in diameter–although transparency was poor and it surely extended further. I looked for any irregularity, and if anything I thought it was possible that the core hung a bit to the southeast. I think it’s a shame I wasn’t able to grab more field stars.

M75 is about 67,500 light years distant, with some sources listing a distance of 100,000 light years. It is one of the more remote Messier globular clusters and is about 47,600 light years from the galactic center. It is also one of the more concentrated globular clusters (Class I). Due to this compactness and its large distance, a larger scope is required to resolve its member stars (so my problems with the atmosphere can’t be blamed in this case). The cluster is about 130 light years in diameter and is as luminous as 180,000 suns. M75 was discovered by Pierre Méchain in 1780. It was resolved into stars in 1784 by William Herschel.