After catching glimpses of Supernova 2005cs in M51 last week. I thought I’d have a try at photographing it. It’s been 10 months since I last hooked the camera into the eyepiece and messed with imaging something. (Piggyback wide-field shots are so much easier =)

Anyway, I learned a few more things about finessing my scope with a camera attached, and I caught SN2005cs in the process. My astrophotos are really sorry compared to all the other excellent amateur work out there, but here goes.

I tried 3 different exposures to see what gave the best results. I had hoped grabbing a couple dozen 30 second shots would give me enough signal to stack them together and get a decent image without worrying about tracking errors. But that was no good. I got the slightest hint of the galaxies, and even the speck of the supernova, but the signal to noise ratio in each image was so horrible that I probably would have had to stack a few hundred to get anything usable.

The 60 second exposures weren’t much better. But I grabbed 3 5-minute exposures that burned in a lot more light and I managed to stack together a passible image. The problem was that tracking errors really did show up. The stroke of luck that helped me was that the errors splayed in different directions on each image so that by stacking 3 together, I managed to intersect the best parts of all 3 and subdue the errors. It wasn’t great, but it was vastly better than tons of 30-second images.

Here is the first image after subtracting dark frames (to remove noise) and stacking the 3 images. 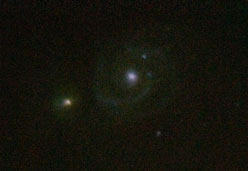 The next image shows the application of curves to boost brightness and contrast in the critical tones of the galaxies. 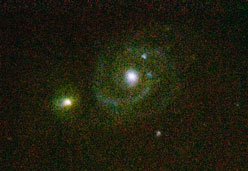 This 3rd image shows the results of using Keith’s Image stacker to apply “Wavelet Shrinkage Denoise” (heh), then “Laplacian Pyramid Sharpen” algorithms to remove much of the noise in the image, and sharpen it without emphasizing any remaining random noise. 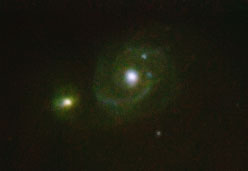 The next image shows the results of moving the image to L*a*b color space to blur out color noise in the a and b channels, and boost contrast of the Luminosity channel. I brought it back into RGB color space and adjusted curves to address the yellow-green color cast. I shot for more neutral values in the background and a reasonable neutral white in the bright core of M51. I also did some channel blending into a “luminosity layer” to boost contrast in the arms of the galaxy. (The blue channel had some surprisingly great detail that was getting short-changed because blue gets low points in the luminosity game–so I gave it a nudge in the right direction without falsifying image color.) The end result is a distinctly yellower NGC 5195 which corresponds to the presentation in many astro photos of the pair. Clicking on the image will show a larger version. 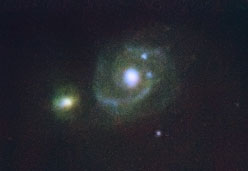 This last image shows what a bit more judicious sharpening was able to do for the image. Some of the dark lanes running through the bright portions of the arms are a bit more defined. Move your mouse over the image to see the position of the supernova. 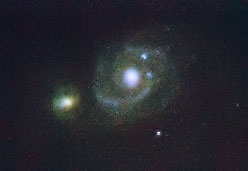 Aside from grabbing my own record of the event, I picked up three things I want to work on next time.

1) Focus. I need to spend a bit more time analyzing focus before taking the shot. I prepped focus on a star that was way too bright. So it flooded the CMOS chip and didn’t give me enough of a point-source to fiddle with. I was also impatient. That won’t work with focus. With my setup, it is a huge, unpredictable pain.

2) Balance. I think part of my tracking errors during the long exposure had to do with the balance of the scope and camera. Once the camera is attached, the normal rules of scope balancing go straight out the window. The entire arrangement of devices invokes laws of physics I don’t begin to understand. I just need to mess with the position of all objects–scope, weights, and camera position–to be sure there is a slight pull AGAINST the drive. I think it was PUSHING with the drive last time or flopping somewhere in between.

3) Long Exposures. If I can get #2 in better shape, I really need to go with at least 5 minutes for galaxies and nebulae to give them any shot at justice. I think if I had tinkered with the focus just a bit more, and had shot another 6 shots at 5 minutes, I could have really punched that image up a lot more.

Problem is, this stuff is time consuming and frustrating. I’m not cut out for it on a regular basis. I’d much rather sketch what I see.

Still, as crummy as that image is, it’s my own, and it gives me a little warm fuzzy to gander at it.