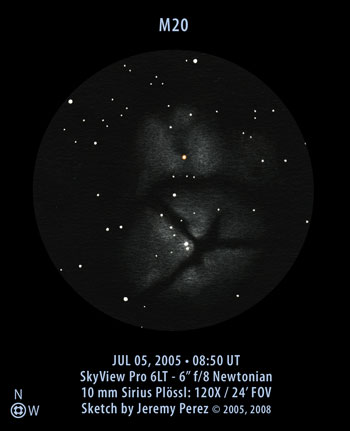 The above sketch is an redraw of the original to clean it up, remove color cast, and update formatting. The original is shown below. 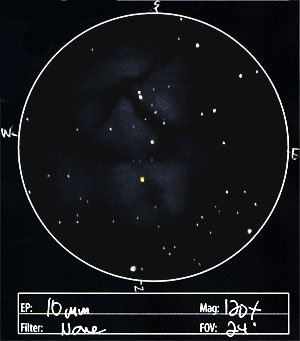 M20 is a beautiful, two-lobed nebula. The southern lobe had a double-star at its core. The northern lobe had a yellow-appearing star at its heart. The northern lobe was more diffuse–not as bright. It contained a hollow region north of its central star. I’d rate its extent at 7′. The southern lobe was brighter and had dark lanes running through it. These lanes divided the nebula into 3 main slices. The eastern slice seemed to encompass the double-star in the center. The southwest slice had the least angular central apex, although it did seem to have an extra split at the northwest side.

Applying an Ultrablock filter extinguished the northern lobe almost completely, except for a hint of haziness around its central star. The following sketch illustrates the view: 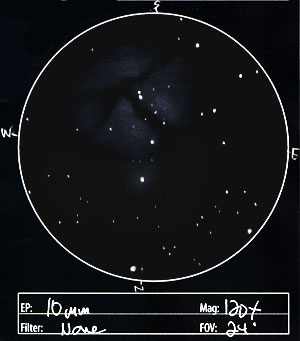 If I were to take some artistic liberty and apply what this difference in the view means about the color of the different portions of the nebula, I would colorize it as follows: 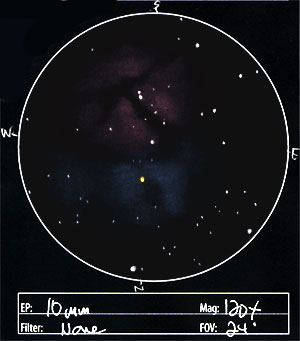 Of course, the naked-eye view does not offer such a colorful presentation, but astro-photography does reveal that the southern lobe of the nebula is an emission nebula, exhibiting a reddish glow, while the northern lobe is a blueish reflection nebula.

M20, The Trifid Nebula, is a famous and beautiful target for astro-photographers. The red emission nebula contains a young star cluster at its center, and is surrounded by a blue reflection nebula that is most noticeable at the northern end. It’s distance is not well agreed upon, and is listed anywhere from 2,200 light years (Mallas/Kreimer) to 9000 light years (Jeff Hester). Its magnitude estimate is also wide, and is listed from 9.0 (Kenneth Glyn Jones) to 6.8 (Machholz). Part of the magnitude difficulty comes from the very bright triple-star system at the heart of the nebula.

The dark nebula that crosses the Trifid was cataloged by Barnard and listed as B 85. The object was originally cataloged by Charles Messier in 1764, when he described it as a cluster of stars. William Herschel assigned catalog numbers to 4 different parts of the nebula (H IV.41, H V.10, H V.11, and H V.12).