Last Saturday, a friend of mine, Michael Poppre, drove up from Phoenix to do some high altitude star watching. He brought his 150 mm reflector, a nice collection of eyepieces, and a healthy fear of Circle-K hot dogs. After loading up my gear, I replayed a routine I picked up from my Mom when I was a child as I stood in the open doorway, looking back into the house, mouthing the words ‘what am I forgetting…’ over and over.
We had been watching the clouds gradually clearing out from a storm that rolled through the day before, and decided on an observing site southeast of town called Anderson Mesa. It’s a few miles down the road to Lake Mary and up a service road to a dark-sky satellite observatory for Lowell. Along the way, we stopped by Circle K so Mike could warm up his coffee thermos. I decided I liked the smell of some greasy dogs rolling away on the warmer, so I picked one up. Mike got a disgusted look on his face asked me if I should go ahead and pick up some toilet paper while I was at it.
Smart-aleck.

Outside as he filled up his thermos, he complained he could still smell it all the way over by his car. 😛
It was good.
People underestimate the power of my iron gut.
We got to the site, analyzed the tree positions, and set up shop. We both have the same size scope, but there are a few differences. Mike’s sits on a pier, while mine sits on a tripod. The main advantage to the pier being you can observe something straight overhead without running the scope up against the support. Also, his polar alignment requires some serious bolt crankage. He asked if I would help tighten the altitude bolt while he kept Polaris centered. I was like “OK, which way do you want me to turn this?” and he was all “Righty Tighty/Lefty Loosey…”
Smart-aleck.
I almost knocked his pretty white scope off the mount with that first crank. ; )
Anyway, the sky gets dark quick this time of year. As the reds, oranges, and yellows turned to waning blue, I pulled up Saturn. I hope I never get jaded to that sight. It is always amazing to me that a natural object could appear so geometrically perfect. That feeling of wonder, and connection to something so vast and distant is what really compels me to pursue this hobby. For an observation so soon after sunset, the view of Saturn was excellent. The Cassini division was clean and easily visible all the way around. The planet’s shadow cast a dark arc across the back side of the rings, along the eastern side, while the faint ruddy band of the South Equatorial Belt swung across the middle of the cream colored globe. I left the scope there and went to chatter with Mike.
While we waited out the twilight, we took shots at guessing which stars and planets were appearing first. Sirius, Jupiter, Castor, Pollux, Saturn, Arcturus, Capella…
Due to clouds and various forms of pulmonary diseases, I hadn’t been out observing for a couple months. So I was looking at a series of constellations I hadn’t focused on before. I had observed in Virgo and Leo during some late nights earlier in the year, but Boötes, Corona Borealis, Corvus, and Crater were new ones I needed to work on. Mike kindly pointed out the kite shape of Boötes. I got to add his pronunciation of Boötes to my list of endlessly different takes on astronomical pronunciations for anything and everything: Bow-OO-tees, Bow-AH-teez, BAH-oh-tez, Boots, etc. Oh, and let’s don’t forget Betelgeuse: BEE-tel-juice, BAY-tel-juice, or Buh-TELL-gus. Or how about Uranus: Yoor-AY-nus, YOOR-uh-nus, oo-RAH-nus, Your ANUS hahahah. 😛 I avoid talking about Uranus whenever possible.
So whatever. It got dark. For the most part, we spent our time cruising through the galaxies in Virgo, Leo and Coma Berenices. As I’ve worked through the Astronomical League’s Messier observing program, I’ve known that the Virgo Galaxy Cluster would be coming up on the roster for late Spring. I really should find some comfort that Messier only catalogued sixteen of the 2000 or so galaxies in the cluster. My six inch scope isn’t a big galaxy grabber by any means, but the sky at Anderson Mesa can be fantastically dark. I decided I’d do a dry run through the cluster and see how far I got before getting lost.
I checked my Bright Star Atlas and decided to start the tour at M61, a lone galaxy, easy to find near a bright star in Virgo (16 Vir). Once I had it centered, I started galaxy-hopping degree by degree, field-of-view by field-of-view along a curling stream of galactic seed-pods. I found it very satisfying to see the galaxy-hopping process work so well. Because we had a reasonably dark sky, a number of other unplotted galaxies showed up along the way, but inevitably, the brightest ones were right where the atlas said they should be. 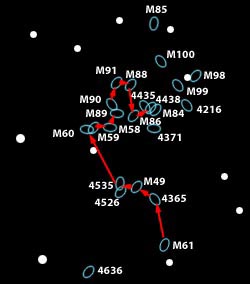 At the end of my tour was an area that turned out to be a big train wreck of galaxies. I felt a little bad getting so absorbed in the observation while Mike was there observing with me, but I had to sketch the view: 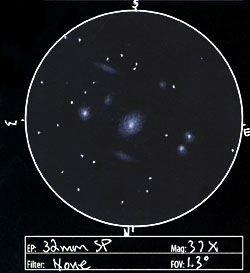 Two of those galaxies are bright Messier objects (M84 and M86). Another 2 are listed in the Bright Star Atlas (NGC 4435 & 4438). The identities of the other 4 I had to dig up later at home. And this is just through my 6″ scope. I was very pleased to get such a view. I imagine the field must be crazy through larger scopes. As it is, I was in a bit too much of a hurry and missed sketching NGC 4413, which would have brought the total in the eyepiece to nine. 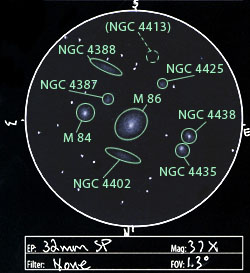 We compared views of this area between our two scopes, and they looked very much the same. But on some other objects, Mike’s scope really shone in my opinion. We compared views of M57 in Lyra. It had a blue green color in both scopes, but appeared noticeably brighter in Mike’s scope. I’m not sure if it’s a function of better flocking, cleaner mirrors, or a better eyepiece, but it looked really good.
As the night wore on, we took turns trying to see detail on the surface of Jupiter. The Great Red Spot was due to cross the face of the planet around 1 am, but we had a heck of a time seeing it. The passing storm system had really churned up the air, and it seemed like it was getting worse as the night wore on. I eventually caught a very indistinct glimpse of it emerging from the east side of the planet, but it was pretty hazy. Mike had a blue filter that we tried in both scopes, but I couldn’t honestly say it helped any.
We also took a look at Omega Centauri. It just barely clears the horizon from this latitude, and we had to wait for it to appear from between patches of trees to the south, but it was still an impressive sight. At first I just saw it as a large diffuse glow, but Mike noted he was resolving the granularity of stars with averted vision. I took another look, and sure enough it did have a sandpapery appearance, despite being so low in the sky.
A few degrees north, we pulled up Centaurus A . Pictures of it make me think of some evil-twin version of Saturn. Through my scope, it looks more like a hamburger–two soft glowing halves with a dark meat patty in between.
As we were checking these things out, the Summer Milky Way had become an ominous presence in the East. Anyone who has never watched this part of the Milky Way emerge over the horizon under a dark sky, really should make an effort to do so sometime. To me, it gives the impression of an approaching storm, lit from within, looming over the black hills and trees. Very humbling.
The bonus round was on, and we finished the night off checking out The Lagoon Nebula (M8) ,The Swan Nebula (M17) , and The Eagle Nebula (M16) . While we were at it, Mike caught a couple globular clusters in the area that he hadn’t observed before.
It was closing in on 2 am and dew and ice were starting to futz with everything. Not to mention that tiredness was starting to settle in, and I had to be up at 8 am, so we packed it all up and headed back. Mike crashed on the couch, and then slipped silently away with the rising sun before my kids, my wife or myself had rolled out of bed. Some other closet-astro-geek friends of mine from around these parts have expressed an interest in getting together for some pristine-sky observing after running across some of my ramblings here. So I’m hoping to lure a few more of them over, sometime in August when the Summer Milky Way is riding high and ripe for the picking.
It’s good to be back out under the stars again.