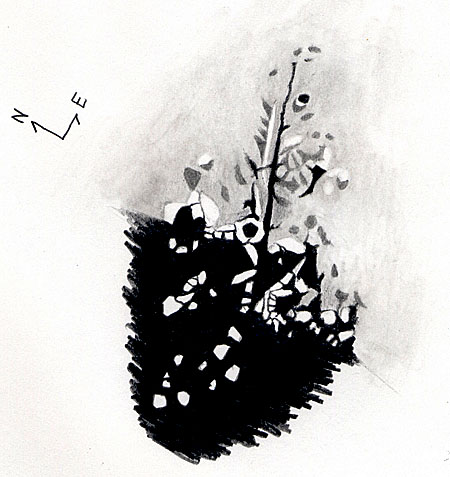 The 7-day old moon is an extraordinary sight. There is so much to see on the terminator. I spent some time observing with Chris Yetman who called attention to brilliant Proclus, spattering white on the easter limb. Vallis Alpes was beautifully lit. It alternatively appeared as a jutting sword, hilted in shadow, or more like a fishing rod, complete with a startling reel on its north side along the terminator. The terrain was jumbled and blocky in places. The valley had a discernable width, with shadow on the south side, and a bright northern wall.

Vallis Alpes is a unique feature that slices cleanly through 130 km of Montes Alpes. It is as wide as 20 km in places and on average, its walls rise to 2000 meters over the floor. A small rille winds its way down the center of the valley, the southern portions of which can be seen by a 200 mm aperture telescope. Soon after the Imbrium basin was excavated by an asteroid impact, the surrounding crust settled and tension caused 2 parallel faults to form across the Alpine range. The region between the faults subsided beneath the level of the mountain tops. The floor of the valley was eventually flooded with lava that flowed from the Maria. Its width of 20 km is so great that it is not referred to as a rille.