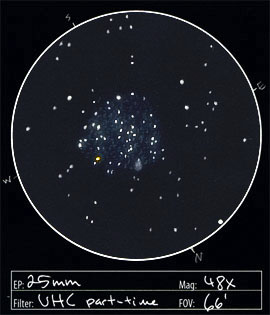 This is a dense cluster with a granular base of stars. It was a rough circle. On the north side, there was a small round patch of nebulosity about 2′-3′ in diameter. The body of M46 seemed to be about 22′ in diameter, but not particularly concentrated toward the center. It was really a beautiful sight–very sprinkly and glowing.

I alternated using the Orion Ultrablock filter to see what kind of difference it made on the small planetary nebula, and it did hilight that the nebula was indeed a different beast from the glow of the cluster–although I was still able to see it without the filter. One bright star in the cluster shone like a beacon right against the southeast side of the ball of the nebula. Seeing seemed too poor to bother resolving more at higher magnification. Perhaps another time.

M46 is a very rich cluster with 150 stars greater than magnitude 10-13, and a total population around 500 stars. The brightest stars are spectral type A0, 100 times brighter than the sun, indicating an age of about 300 million years. The cluster is about 5400 light years distant, with a diameter of about 30 light years. It is receding from us at 41.4 km/sec.

NGC 2438 is a famous companion to the view of M46. It is not likely a member of the cluster, because it has a radial velocity 43 km/sec different from the cluster. An estimate by Woldemar Götz puts its distance at 2900 light years, which is much closer compared to the cluster. This planetary nebula was discovered by William Herschel in 1786. Its diameter of 1.1′ is half my estimate–indicating that I probably need to use a 240X view to guage sizes of small objects like this 😉