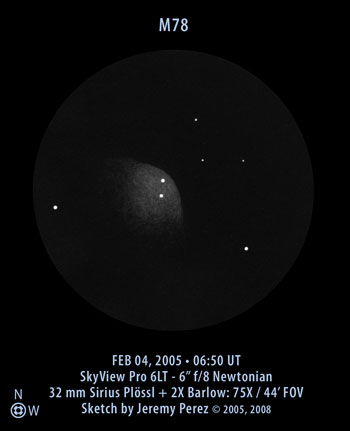 The above sketch is an update to the original to clean it up and update formatting. The original is shown below. 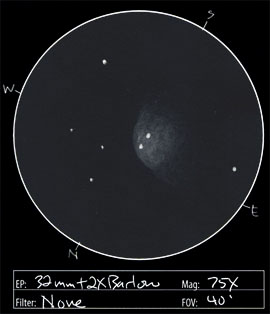 This appeared as a cup-shaped nebula surrounding two stars which are aligned north to south. The arrangement looks like two vessels plowing through the water, forcing a bow-shock around them. The nebulosity is sharpest along the curving northwest side and fades softly to the south through east. I didn’t discern any color in the nebula or stars.

M78 is the brightest diffuse reflection nebula in the sky. The dusty region around M78 plays host to NGC 2071 (to the northeast), NGC 2067 (to the northwest), NGC 2064 (to the southwest), as well as the slightly more distant NGC 2024 (the flame nebula). All of these nebulae are part of the molecular cloud LDN 1630. This molecular cloud itself is just a small part of the much larger ‘Orion Complex’. This complex is a large cloud of gas and dust centered around the brilliant Orion Nebula (M42/M43) and is about 1600 light years away. Infrared exploration of this region has shown a cluster of young stars embedded within the nebula.

M78 was discovered in 1780 by Pierre Méchain, and catalogued by Charles Messier in 1780.