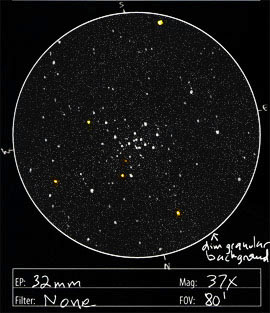 Messier 36 was loaded with quite a few close doubles. The brightest stars seemed to congregate on the south side, with a bright yellow field star on the south-southeast end of the view. The cluster was nestled within a finely-grained backdrop of Milky Way stars. The color of individual stars in the cluster was hard to determine. The brightest fluctuated between looking white and looking light blue. Its overall extent appeared to be about 20′ in diameter.

Over the course of 45 minutes of sketching, I was amazed to see six satellites zoom through the view–one of them, moving west to east flickered in brightness, possibly indicating it was tumbling. I wonder if I stumbled into a passing satellite constellation, because I’ve never noticed that level of coincidental crossings before. To top off the mood of mystery, strange chewing, scratching sounds were emenating from the garage. That really put me on edge. I didn’t see any skunks. They do traipse through our yard now and then, but they should be hibernating this time of year. Little stinkers.

M36 is about 4100 light years away, which would give it a diameter of about 14 light years. SEDS lists its angular diameter as 12′ which is quite a bit smaller than what I estimated in the sketch. Maybe I’m estimating non-member stars in that diameter. One source, Wallenquist, lists a diameter of 19′, but it sounds like he’s in the minority. The cluster has about 60 proven members, the brightest of which are spectral type B2. Many of these bright stars are rotating very rapidly, which is similar to the behavior of the Pleiades stars. In fact, if this cluster were 10 times closer, it would appear as conspicuous and very similar to the Pleiades. Because the cluster is only about 25 million years old, it contains no red giants, in contrast to nearby M37 and M38.