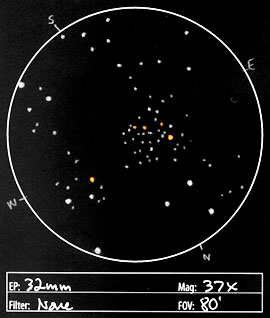 M67 is a nice, subtle open cluster, particularly in comparison to M41 which I viewed earlier in the evening. There is one bright yellow-orange star on the east side of the cluster. There are a few more orange stars scattered around. The main body of the cluster appears to be around 18′ across. The stars seem to keep to an irregular, roundish boundary. I plotted 40 stars in that area, down to mag. 11.7.

M67 resides 2,700 light years distant, and is a peculiar open cluster due to its age. Its age is estimated between 3.2 and 4 billion years, and only a few are known to be older. Open clusters usually fly apart much sooner than this. It’s anticipated that M67 can continue to exist as an open cluster for another 5 billion years. This cluster contains at least 500 stars, of which nearly 200 are white dwarfs. Because M67 is of a similar age to the solar system, and its stars have a similar composition to the sun, it is a good target for observation of solar-type stars.

Reportedly, M67 was originally discovered by Johann Elert Bode prior to 1779. Charles Messier rediscovered the cluster in 1780 and resolved it into stars.