Since it’s been so cloudy lately, I’ve been working on a solution to my DSO sketch lighting. Up to this point, I’ve been laying the red light on the clipboard and trying to slide it around and keep it from falling off at the same time. It is a pain. What I want is a variable-brightness red light on a gooseneck with a clip on the other end to attach to the clipboard. I searched and searched, and there is no single product that meets all those qualifications. So I set out to make my own.
I already have a red flashlight from Orion that has variable brightness. Checkmark. Easy part.
Next would be a gooseneck that has a clip on both ends. One for the clipboard, and one for the flashlight. I bought a cheap copy-holder from Office Max that had clips on both ends. It broke the second I removed it from the packaging. Bleah. After endless searching online, I came up empty-handed. So the next step was to buy an electric lamps with a clip and a gooseneck. I got one at Office Max for $12. Then I picked up a spring loaded clamp and a hose-clamp at the hardware store.
After spending some time removing the lamp head and electrical wire, I ended up with a clip and a sturdy gooseneck. Then I used the hose-clamp to attach the spring clamp on the other end. After clamping the flashlight at one end and clipping the other to the board, I had something that would point the light where I needed it, and keep it there. 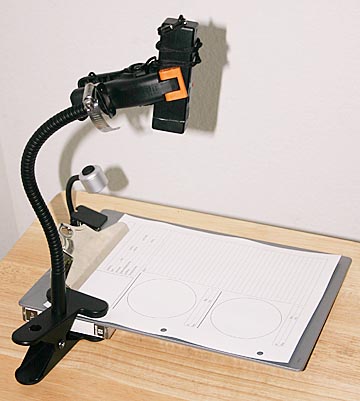 You might notice the plastic cassette holder I stuck under the clipboard. I found I needed to put something there to give the pad on the lower side a more parallel angle for gripping. 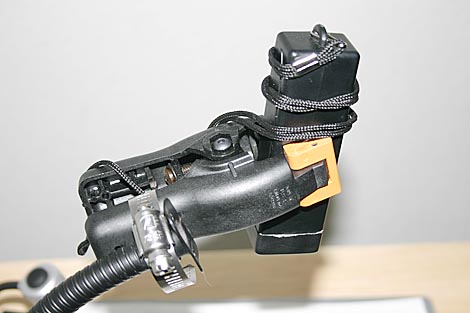 I also picked up a five dollar booklight that will work great for moon sketching I think. 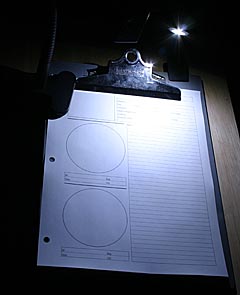 Another issue that needed dealing with was the irritating bullseye pattern the light naturally gives off: 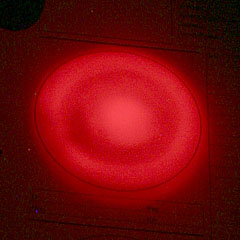 This was an easy fix. I tore off a little strip of wax paper, slipped it behind the glass, and poof! No more bullseye: 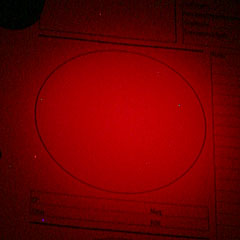 The main thing I’m worried about is the weight of the whole setup. The big clip and gooseneck are heavier than I would like. So I’m going to need to be really conscious of how I hold and cantilever the clipboard while sketching or else it’s going to get tiring. So I’m trading one set of irritations for another, but at least this one does what I want it to. I took it out for a trial run yesterday night doing a naked eye sketch of Orion (I said naked EYE). It worked great, but I had the convenience of sitting down while I did it. I don’t have a tall astronomy chair for telescope viewing yet, so I have to deal with standing mostly for now. I’m still keeping my eyes peeled for a less bulky alternative.
[Edit: April 25, 2006]
I recently received some correspondence from an amateur astronomer, Kim from Mag 3 Skies who has come up with a clever solution to sketch lighting and sells it at her site:
Ultra Darklight
Go have a look!