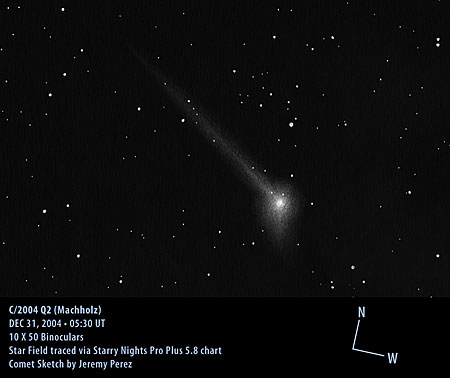 The above image is a graphite sketch redrawn based on the original digital sketch. The star field was generated by Starry Night Pro 5.8. Click image for larger version.

Well, the weather and my schedule hasn’t been cooperating too much lately for getting out under the stars with more than a pair of binoculars. Tonight, the clouds parted for a while, and the moon had yet to rise, so I took a look for Machholz at 10:30 pm. As the days go by, it keeps getting brighter. I’m still not sure how to go about estimating brightness for fuzzy things like this. But I could make out the thin ion tail with averted vision to the east-northeast, and what seemed to be a widening of the coma that would be the dust tail the south. I worked out a digital sketch over the course of 3 trips outside. I wasn’t dressed for the occasion, so I didn’t want to get everything put together for a pencil sketch. I worked up the sketch in Photoshop. I don’t think this is the way I’d like to do things very often. It doesn’t seem as precise, and it’s bad for dark adaptation.

Anyway, after putting it together, I checked in Orion’s The Sky, the only thing I had to fix was a slight adjustment to the position of 2 stars on the east side of the sketch. I don’t know about anyone else that observes comets or asteroids, but I get a charge out of plotting its position at a specific time, and the having it confirmed neatly by the planetarium software. The position of Machholz worked out to RA 3h 53m / Dec +07ï¿½ 21′. I labeled the major stars that surrounded it. Based on the angular separation of those stars, I would estimate the portion of the coma visible to me was 19′ in diameter, while the ion tail extended 50′. Under direct vision I still pick up the faintest hint of green. I haven’t found any recent photos of the comet to verify that I’m seeing what I think I’m seeing, so if somebody sees anything fishy about this, let me know.