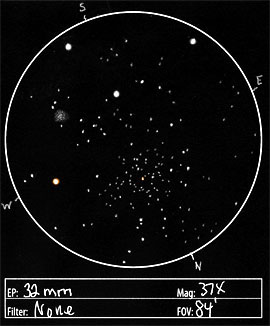 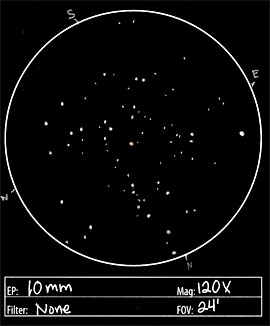 This is my first official observation of an Auriga open cluster. The member stars are easily resolved. The main body appears to be 20′ wide east to west and a bit narrower north to south (which matches up pretty nicely to the 21′ dimension on the SEDS website 😀 ). The stars stream away radially from a mostly clear central void that has a conspicuous center star. One notable trail of stars heads out the north side. Including these stragglers, the cluster is more like 30′ in diameter. There was another smaller, probably more distant cluster (NGC 1907), about 38′ south-southwest of the center of the cluster. The sketch of M38 is a star-for-star plot (no texture stippling). Some relationships are a little distorted. This open cluster sketching is tough!

Anyway, the small cluster showed some granularity (I did use some stippling there for texture). I wondered if I was seeing some granularity in M38, so I went to 120X. I noticed some more faint stars, but not much in the way of unresolved members. The central void is still obvious. I’d put the diameter of that open space at 6′. I have a hint that the center star is orange. Not completely positive.

People see different shapes in the stars of this cluster. Some see a Greek letter Pi, while others see an X or a cross. At a distance of 4200 light years, its diameter is about 25 light years. It is about 220 million years old and contains a yellow giant (mag. 7.9) as its brightest member with a luminosity of 900 suns.

M38 was discovered by Hodierna before 1654, independently found by Le Gentil in 1749, and then cataloged by Charles Messier in 1764.